Calumet Photo of the week... again! 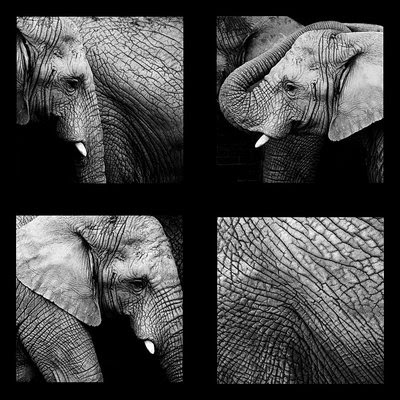 Well another week another image on Calumet Photo of the Week, it's the Elephant picture that is shown top left, the one I was thinking about getting some prints made up to sell. Well now I'm thinking a series of images instead.
To link to Calumet UK site click on blog title
at March 24, 2009 3 comments: 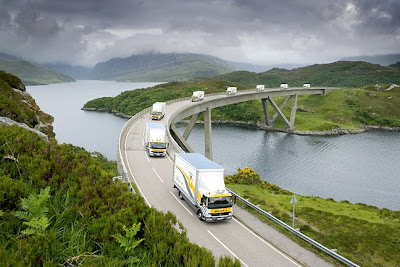 Kylesku sits on the banks of Loch Glendhu, a small village with one pub, a B&B, a slipway for boats, and an RAF inflatable military tank target anchored next to the bridge. Oh yes the bridge, that's why we went there. Kylesku is approximately 470 miles from my front door, we went for the bridge, it curves across the lock linking Kylesku with Ulapool on the A894. My client found the bridge by trawling the internet, he wanted something different, it's definitely that. Sitting on the far North West coast of Scotland with magnificent views in every direction, Kylesku is rugged, beautiful and very remote.
The shoot was to be done over two days, though this also included the journey there and back. The Lorry required for the shoot, a Mercedes-Benz Atego, was already on it's way to Scotland well before my client, an assistant and myself headed North. The journey took nearly 9 hours, with a couple of stops for food and other necessary breaks and was pretty uneventful, the scenery though as we headed North just became more stunning as the miles slipped by, especially once we reached the highlands.
It was late afternoon by the time we finally pulled into Kylesku, after a slight problem with the sat-nav having taken us slightly off course, it was cloudy but the decision was made to get on with the shoot. After discussions about where to shoot from and where we wanted the lorry to stop for each exposure, it was a case of dragging the camera equipment and tripod up a small cliff, once on the top of the cliff the commanding view of the bridge, lock and mountains was perfect. It was obvious that I'd need to do some photoshop work to get the desired image, mostly because of a large green inflatable army tank sat image right. 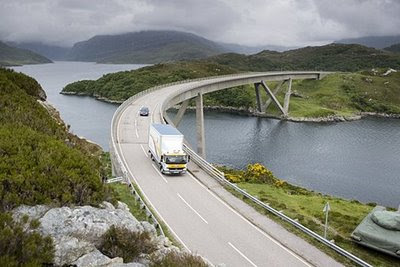 We shot till it started to get dark, picking different angles and waiting for the sun to occasionally poke it's head out from behind the clouds. Then it was off to the pub for some hot grub and a pint. Then back to the B&B for a kip, up again at the crack of dawn, a quick breakfast before starting work again, then the mist rolled in, visibility down to 50 metres. Bugger! After a lot of waiting around the mist started to clear and shooting commenced, we really only had a few hours to get the other images we needed, but we did it. So we repacked the van and were back on the road, heading due south. The 9 hour journey home was interrupted once, as we climbed a mountain road and looked out on a wonderful vista, a Lock with the mountains in the distance. We had to stop and wait a while for the Mercedes Lorry to catch us up, but got a very nice shot for our trouble.

The image below is another in the series for the client, shot on a beach in Wales. There's also a shot of three vans exiting through the gates of Buckingham Palace, but that's another story! 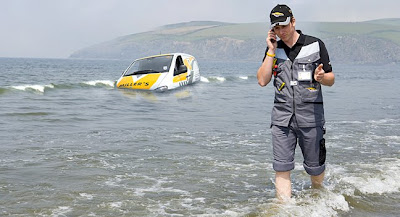 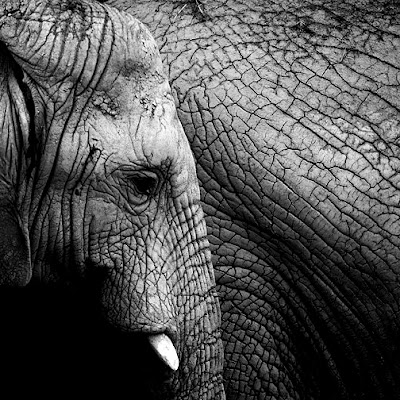 Okay I'm a sucker for Elephants, these two African Elephants are from Knowsley Safari Park, I just love the texture of their skin, it lends itself so well to high contrast Black & White images. I'm thinking of producing this image as a canvas mounted print, what do you think?
Update... Calumet UK photo of the week 24th March 2009
at March 10, 2009 No comments:

I drew this picture a few years ago, whilst having a cartoon drawing session with my nephew, it's full title is "On bugger, not more Bamboo!" I have to admit I feel like that Panda at the moment, as it always eats the same food day in day out, I'm shooting the same sort of thing day in day out. Am I like the Panda, stuck in a rut? I've checked in the mirror, thank God the dark circles under my eyes are from sleepless nights thanks to my two year old son, I'm not turning into a Panda.
I've been shooting a lot of product recently, nothing exciting photographically, simple shots on white backgrounds, but exactly to the clients' brief. Okay on occasion I get out of the studio and travel to a distant location and snap away all day, buildings, vehicles, people, but the products are always there when I get back. Some days I'll shoot a load of products before lunch then, despite having work to do, I'll grab the camera and tripod and go out. I might only find one or two things I really want to photograph, or I may have left it too late and the sun is already in the wrong place, but I think it's important to go out and stimulate myself, remember why I'm doing what I do. I love photography, have done since I was 12 years old. I'll get back and happily get through the rest of the job and smile to myself, it's not all bamboo.
at March 10, 2009 No comments: 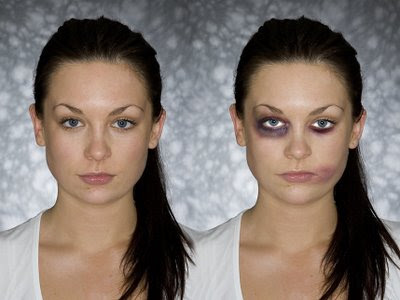 You don't expect to have to black the eye of your model everyday, some jobs demand it, it's actually quite fun watching the makeup artist, in this case Nigel Hughes, slowly build up the black eye, then add the dental cotton wool pads to make the jaw and cheek look swollen, a touch more bruising around the mouth and job done, it all gets a bit more serious during the shoot, you start to think about the real implications of what you're doing the job for. In this case it's for domestic violence awareness, we're doing drug and alcohol abuse shots too. I'll post more images once the jobs are finished. 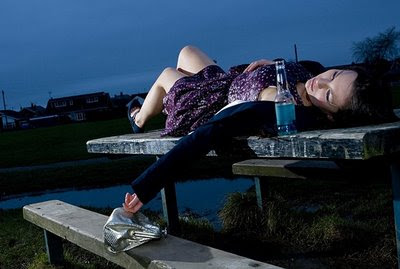 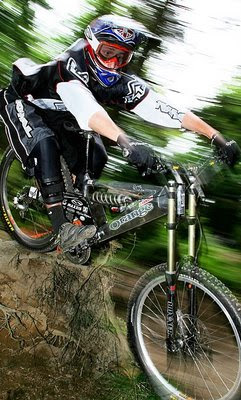 I use to spend a lot of time in the woods, usually waiting for a guy covered in head to foot in protective equipment to flash past on £4,000 worth of downhill racing bike. This was before my son was born, though it had been winding down for a while before that. I do miss it, shooting transparency film, both 35 mm and 120 medium format (if I could of dragged a 5 x4 up the hills and mountains, I really would have), processing rucks of film and getting a good hit rate too. I did start shooting digital before I packed in the mountain bike shoots, the image above was shot on my first serious digital camera a Canon D60, a camera that changed my life and for a while my way of shooting. It was a great little camera the D60, I still have it, the batteries are charged and except for a cracked LCD on the top plate. It's in quite good nick and ready for action, though it's not been needed for the last three years since I bought the Canon 1Ds MkII, a camera that once again changed my way of shooting. The D60 freed me from the worries of film and whether I'd got the shot I wanted, I use to rattle off shots like there was no tomorrow. The files were only 18MB and my Blue & White G3 could easily cope with them. The crunch came with the 1Ds, 47.5MB files slowed everything down, even after up-grading to a G4 powermac. My work style changed, I slowed my shot rate down, something akin to shooting medium format. That still didn't help my workflow though, so I bit the bullet and bought a MacPro. Now I'm happy with the camera, the workflow and am seriously thinking it's time to go back to the woods and catch some more action... 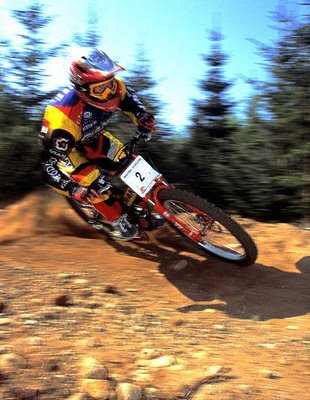 A day at a factory 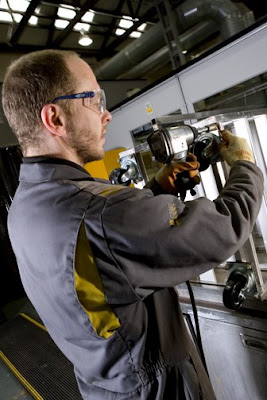 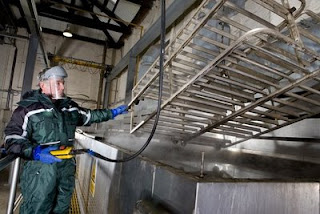 Two factory units, 5 locations, 2 Canon cameras, 3 lenses, 1 Tripod, 6 Bowens flash-heads with stands etc, 2 extension cables, 1 travel pak battery, 5 cases and no assistant. Sounds like murder, well no, not this time, when the client helps out everything goes really well. At the end of the day we had the required shots plus a good library of extra shots too. These big cavernous factory units are usually a little on the dark side, so you need to pour some light into them, or as with some of the shots, not, just to give a bit more drama. The clients happy and better still there's now more to do at another of their sites. 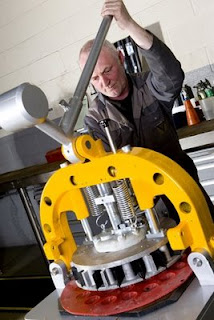 Calumet Photo of the week... Loaded the Holga with Kodak 400CN, got to the front door and the heavens opened. The light has gone and it's wet, so back to the mac and onwards to the blog. The picture above wasn't taken on a Holga, nor a digital camera, but on a trusty Mamiya 645 Pro with a 45 mm f2.8 lens on Provia 100 film, it was taken in some woods in North Wales on a rotten cold and wet day with a couple of flashes on slaves. I got some nice shots that day, despite the weather. In today's post was a copy of Calumet focus magazine, I'd almost forgotten that in December this image was their photo of the week on their website, they print them in the magazine/brochure too, I got a signed copy of James Martin's book "Driven-Cooking in the fast lane-My story", (which I do intend to read when I've got a moment) for my efforts - a simple upload to the Calumet website. I'm just wondering if I upload some more images whether I might get a Hasselblad HD3 MkII out of them!
at March 05, 2009 No comments:

I should be working, I'm not, I'm sat looking at the screen wondering what to write. I'm occasionally interrupted by the ding of my e-mail, a client wonders if I could tweak an image of a radiator I shot last month to make it look like one I've not shot at all, done it. Now back to trying to think of what to write. Digital photography is great, or is it? I've just done myself out of shooting something new, I've tweaked an existing image and made something new, okay I'll charge for it but that's not the point. Back in the days of film and before image manipulation became readily available everything was photographed, okay you could spend a fortune on retouching but the client never liked that idea. I seem to be altering existing images a lot these days and that's taking me away from what I always loved to do, take pictures. I have become a 'Mac operator', who will also take snaps to feed the computer. This isn't what I learned my craft for, it's just a necessity now, extra baggage that comes with digital photography. Gone are the re-touchers, skilled in bleaching transparencies or prints, wonders with with airbrush and frisk film, where did they go? Where will I go, what will I do when CGI gets so cheap that photographers will be surplus to requirements?
Okay I've had enough now, I'm going to load some B & W film in the cheap toy Holga camera I bought at Christmas and go out and take some funky pictures. Till the phone starts ringing and the work starts flowing in again.
at March 05, 2009 1 comment: