Playing with the kids toys... AGAIN!

Thursday I was playing with the Lego Hero Factory toys, finally getting around to taking some images of them. I wanted to do some shots just of the toys without anything in the background to detract from them. So something simple, so standing them on white perspex, and a grey vinyl background. Lighting was simple to, a pair of 500w Bowens heads with 7 inch reflectors with 20º grids set up behind the toy either side at about 45º to the toy, a 500w head to camera left, with a maxi-light reflector and black cine-foil to flag a good deal of the light, it was almost above the figure. 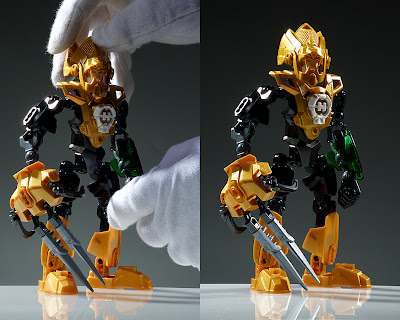 Working with small models shows up all the muck and dust, so as well as cleaning the figures I used white cotton gloves, so as not to leave fingerprints, and a can of dust off to keep the dust at bay. 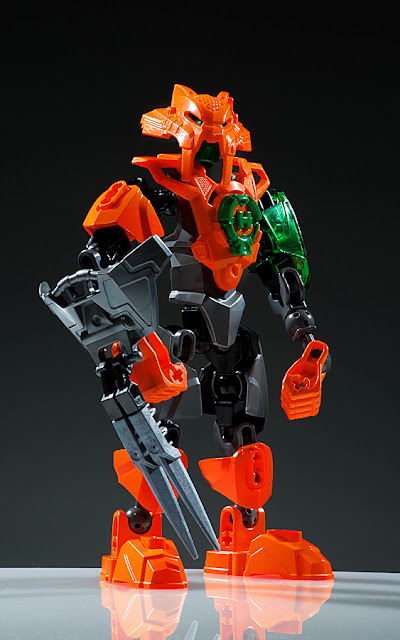 The image at the top of the blog post is a combination of the single figure image and fight scene I created with two of the toys and a couple of pieces of slate that I had in the garden. The toys and the slate were shot agains a Chroma-blue backdrop and thunderstorm clouds were dropped in behind them. I like the effect but I'm going to try something a bit more dynamic and dramatic, a bigger fight scene with more of the Hero toys and their enemy. 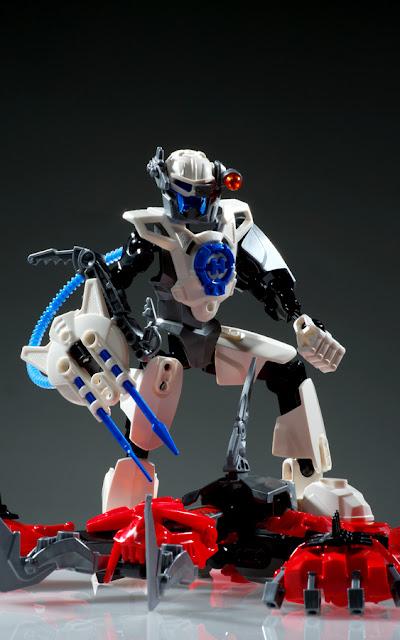 This was shot late on, that classic hunter standing with prey shot, my eldest son has already asked for a print of this for his room. So I'm happy. 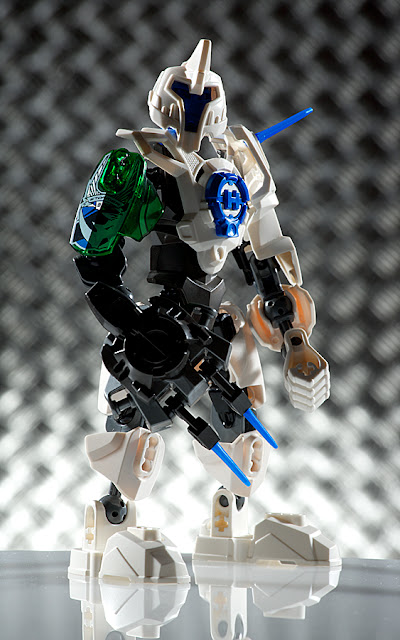 This last shot was an experiment with a different background, in the end it was just to fussy for what I wanted.
at March 31, 2012 No comments:

I had to buy a new tripod head last week, I opted for the Manfrotto 804RC, my previous head, the Manfrotto 490 ball head gave up the ghost after just 3 years and one repair. I'm actually quite pleased with the 804, it's a classic 3-way pan and tilt head and it's had a bit of work to do and so far has coped nicely. The 490 was a replacement for my trusty old 029 3-way pan and tilt head, that served we very well for 15 heavy years of use, it used to have a 5x4 camera almost permanently attached to it until my digital camera came along. The 490 head has been a bit of a thorn in my side to be honest, at first it was brilliant, but after just over a year it started playing up and would sometimes be very difficult to use, very stiff. The one day, solid! So off it went for repair, apparently it was all down to a rubber grommet, so £45 later back it came, fixed, with a warning from the repair technician that it WOULD happen again, great! 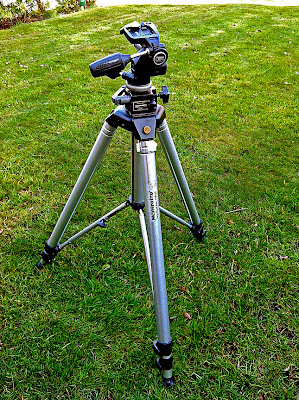 And so it did, not completely solid, but enough to warrant a change. I admit I trawled the net and found a company on Amazon selling the 804 for £46, which is very cheap, I hit that 'BUY NOW' button pretty smartish. So now my 'very old' 075 tripod legs have another new head, I'm hoping it lasts for a good few years... 15 years is my record, lets see how long this one holds up.
at March 15, 2012 No comments:

It was almost hit and miss with Focus this year, I got an urgent job in on Tuesday which had to be turned around by Wednesday, the day I wanted to go down to the NEC, so I worked like a loon to ensure not only was the job shot on Tuesday but processed and off to the client before the end of play. 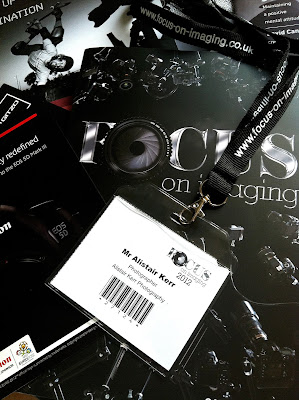 When Wednesday morning rolled around I was off. So with my ticket safely packed in my laptop bag and the Focus on imaging app installed on my iPhone, it was down to Birmingham to spend the day at the NEC to look at all things photographic. 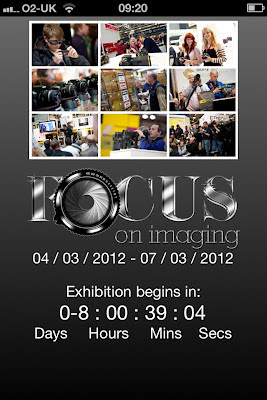 On the way down in the car I studied the app (I wasn't driving) so that I had a general idea who was going to be there and where they would be, there's a map in the app (see below). 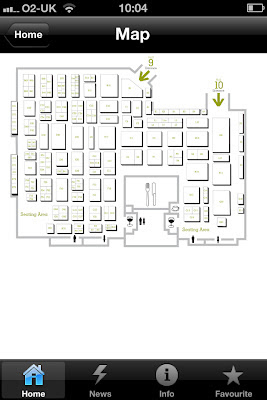 First stop was to the nearest coffee emporium to top up on caffeine, then it was off to meet up with Nathan from FujiFilm, he had a X-1 Pro and an X100 for us to play with, that lead to coffee number two as we sat discussing these two cameras and had a play with them. Without seeing results from the X-1 Pro it's difficult for me to comment on it's performance, but the build quality and attention to detail on the camera are superb. I've seen prints produced from the X100 and would be quite happy to buy one of these little beauties, especially now the price has taken a tumbled from £999 down to £754. 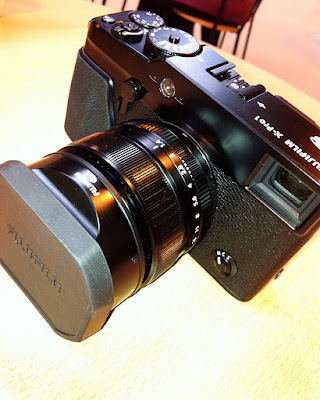 I next made a B-line for Bob Rigby Photographic, just wanted to thank Simon for getting my camera cleaned and sent back to me so quickly. That courtesy sorted I was off on my travels again around the halls. There is a great deal that I bypass at focus, wedding albums, framing (I have a local guy Dennis who does all my framing, he's very good) and the inkjet paper companies. 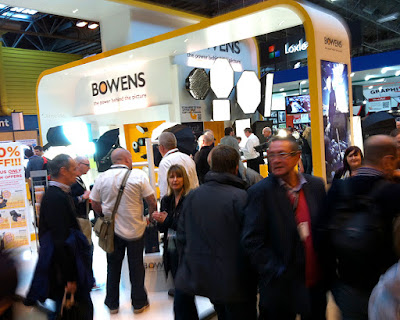 I did have a good look around the lighting equipment exhibitors and spent some time tyre kicking various lighting gear, there wasn't to much there that I hadn't seen or heard about, Bowens had some new Lumiair Softboxes in all the usual shapes and sizes, but with the front baffle set deeper into the front of the softbox. This left room for Egg Crate type grids to be mounted to them, all I can say is, finally! The rest of the stand contained their usual fair of flash heads, kits and reflectors. 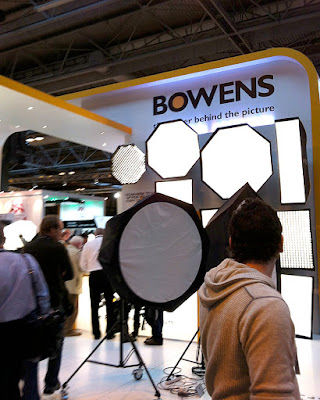 Other kit that caught my eye was the 'Safari' portable lighting kit on the Lencarta stand, interesting and very reasonably priced. The new Lithium Ion Battery Box for Elinchrom's Ranger Quadra RX, but be warned though it meets airline standards some airlines might still reject it, so best keep some of the old batteries if you're travelling by air. 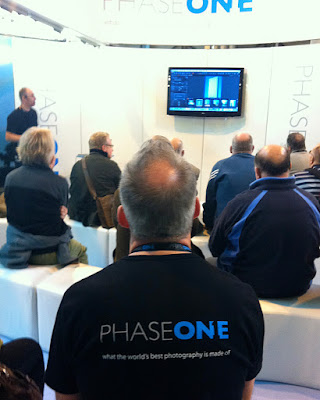 I spent some time at the Phase One stand, played with a Phase One camera and IQ160 Back, very nice, the V-Grip Air is brilliant, it makes the camera feel like a big DSLR and definitely improves handheld shooting. I did stare longingly at the screen as the images taken with this back and the IQ180 were scrolled through, I'd better keep buying the lottery tickets I think.


Canon, of course, had announced the 5D MkIII just days before Focus kicked off and they had  4 or 5 examples of the camera on their stand. After standing around for what seemed like forever I finally got my hands on one and had a bit of time to get acquainted. It feels good, all the dials and buttons are where I'd expect them to be on a top flight Canon camera, the proof, as always is in the output. I think I'll be playing with one of these pretty soon to see how it works in my normal working environment, then who knows...


Well that's about it for my Focus visit, I did have a wander around the camera stores to see what offers were on, but I came away empty handed this year. I did bring home a load of catalogues and a very nice free cotton bag from Manfrotto, but that's all folks!
at March 11, 2012 3 comments:

This weekend my page view tally has hit 14,000, not bad for a couple of years of blogging, I should really try a bit harder, that is the plan, more new stuff is coming, I've actually been thinking about blogging ideas rather than just going over what I've been doing recently. So watch this space.
at March 10, 2012 No comments:

Let me introduce you to the models I'll be using next week...

Well I'm back in action again, I had surgery last friday, just a little op nothing serious, anyway I'm getting back into the swing of things again now. I'd made sure that I kept this week free to recover and had worked like a demented beaver last week to get all my client work finished. So now I'm thinking it's coming up for marketing time, my portfolio is heavily weighted towards product shots, so I've decided to mix it up a little bit. Meet my models...

Okay they're Lego Hero Factory toys, I've had an idea to have an interesting composite cover shot on my next mailer, something dramatic, these guys are pretty funky, colourful and with the addition of some fireballs, smoke, and creative lighting these could be just what I'm looking for. 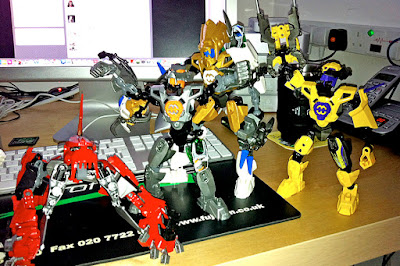 I'll get started next week, I'm still not supposed to be lifting any heavy lighting kit, but will be able to next week. Though I might have to leave Wednesday free as I'm hoping to go down to the NEC and wander around the Focus-On-Imaging show having missed last year. 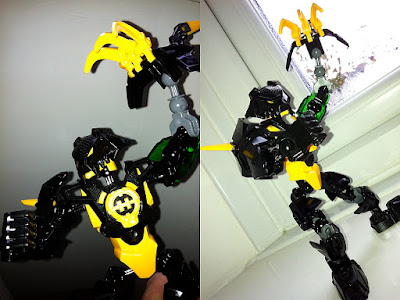 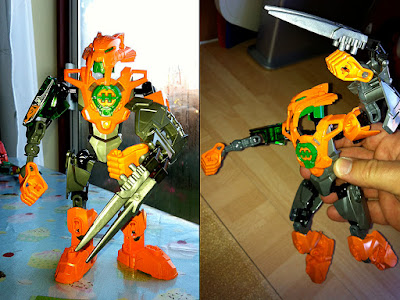