I haven't been in blogging mode for a while, in truth for months. Sometimes life sends you down a different path, it can take a while before life gets back to some kind of normality again, though I defy anyone to explain what normal actual is.

A few things turned me away from keeping up with the blog, mostly personal stuff, though there was one business related issue which made me contemplate packing in altogether, purely money related though, it seemed to sap all my energy. Sometimes the self employed life gets very frustrating.

Now though I'm back, a spring in my step and, unfortunately, a cold in my head. That's not going to stop me though. I'm in the process of building a new, more dynamic, website. I have some new marketing ideas, and I've just picked up a couple of new clients without even trying. Autumn 2013 is looking good. 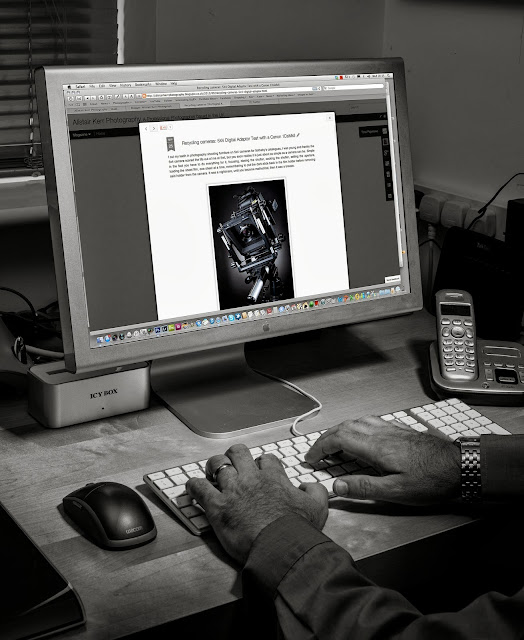 I cut my teeth in photography shooting furniture on 5x4 cameras for Sotheby's catalogues, I was young and frankly the 5x4 camera scared the life out of me at first, but you soon realise it is just about as simple as a camera can be. Simple in the fact you have to do everything for it, focusing, closing the shutter, cocking the shutter, setting the aperture, loading the sheet film, one sheet at a time, remembering to put the dark-slide back in the film holder before removing said holder from the camera. It was a nightmare, until you become methodical, then it was a breeze. 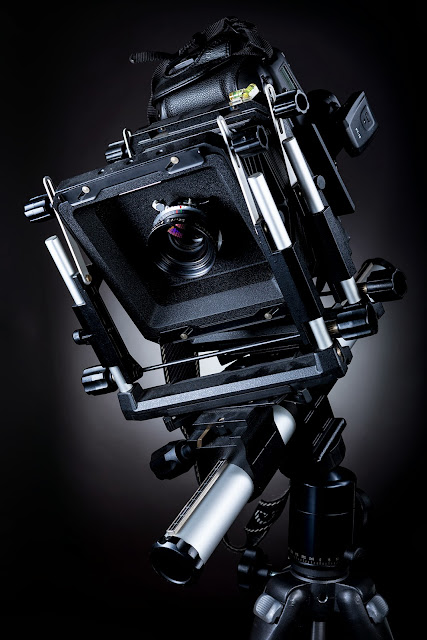 My old Toyo View Camera was mothballed years ago. Clients weren't interested in paying for 5x4 film and processing when they could have digital images from a DSLR on their Mac or PC and off to print faster than it took to drive to Manchester and wait for the film to be dunked through half a dozen chemicals. After considering putting it on ebay, I decided I'd keep the camera, locked it in its box and really forgot all about it. 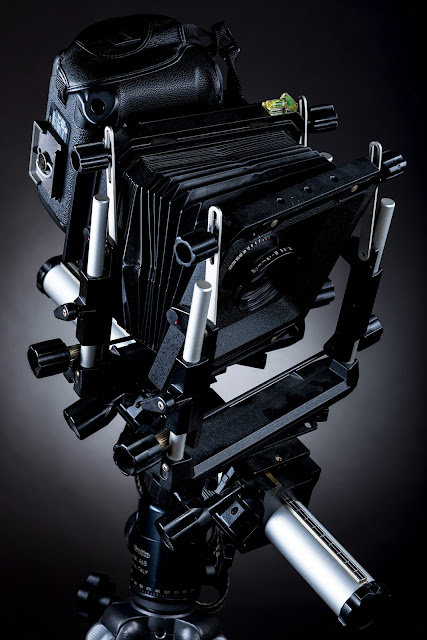 Until I saw an adaptor back on ebay recently, it simply went on the back of the view camera where the old ground glass screen used to sit, I say simply, the ground glass screen had to be removed from its plate and this adaptor secured by the locking plates to the same plate. I was worried I'd smash the glass, but luckily I didn't. 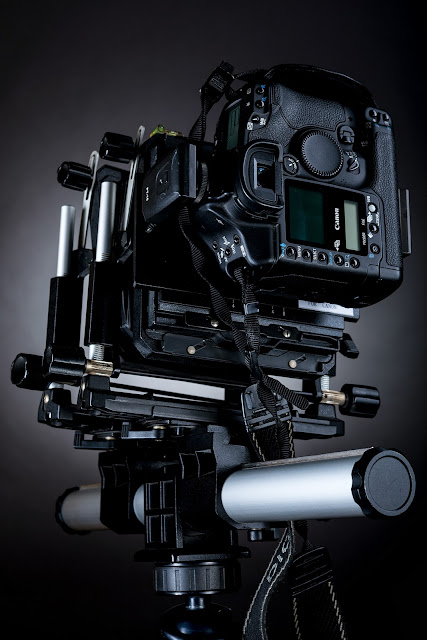 Obviously I opted for the Canon adaptor, Nikon, Sony, Pentax, Olympus and even Mamiya adaptors are available, for the purpose of this test I put on my trusty old Canon 1DsMkII, I used a 5D3 to take the incidental images. 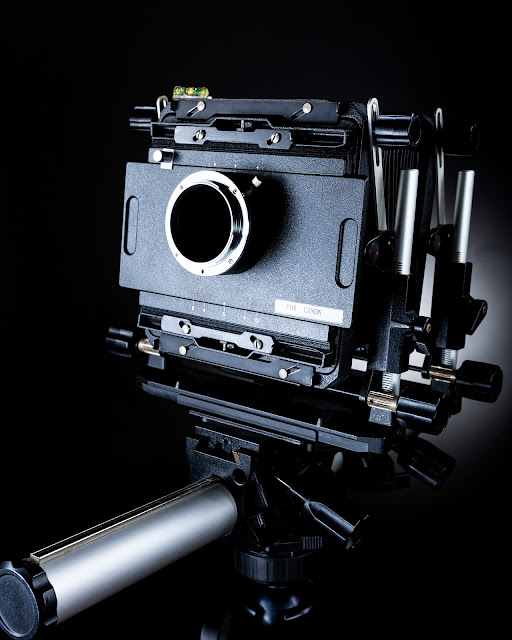 Image above of the adaptor, the camera can be attached and the barrel sticking out of the back plate will rotate, this has a locking feature, the back plate can also be moved to help create panoramic images, which have to be joined together in photoshop, this plate also has a lock. 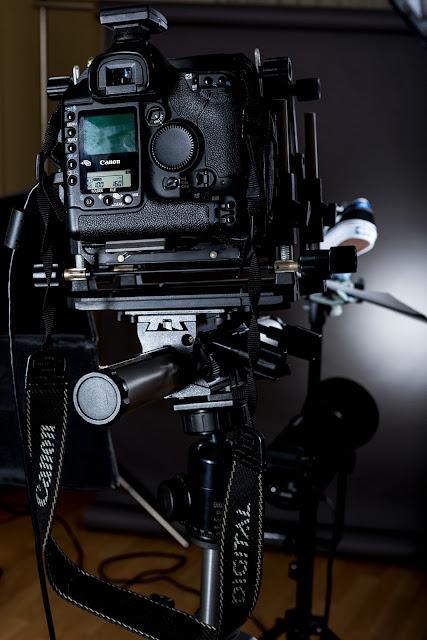 I set up a couple of narrow strip-boxes either side of a shoe, another light with a 7 inch reflector, with a 20° grid, lit the background. The 5x4 camera had a 150 mm lens set in a 40 mm recessed lens board, usually a 150 mm 5x4 lens would be on a flat plate if you were shooting 5x4 film, but with the DSLR mounted a long distance from the lens the recess plate keeps the lens closer to the DSLR, with the flat plate distance shots are almost impossible, close up work only. As the Canon has its own shutter I left the lens shutter open, just using the aperture stopped down to shoot the images. 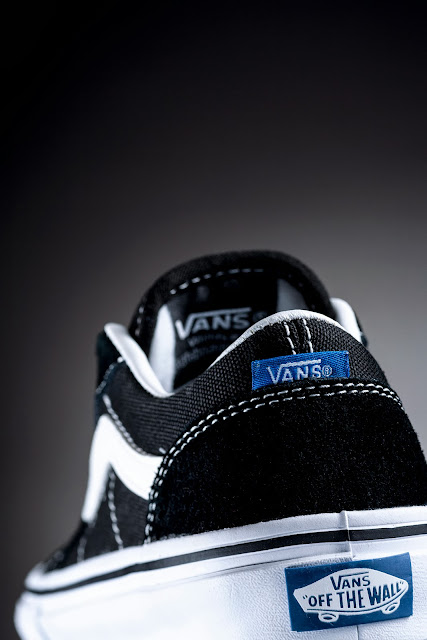 The shoe, I'd ordered some Vans shoes for my kids to use when they go skateboarding, so I grabbed these for the test shots. This shot has shallow depth of field, shot at f 5.6 with the lights power output turned way down. 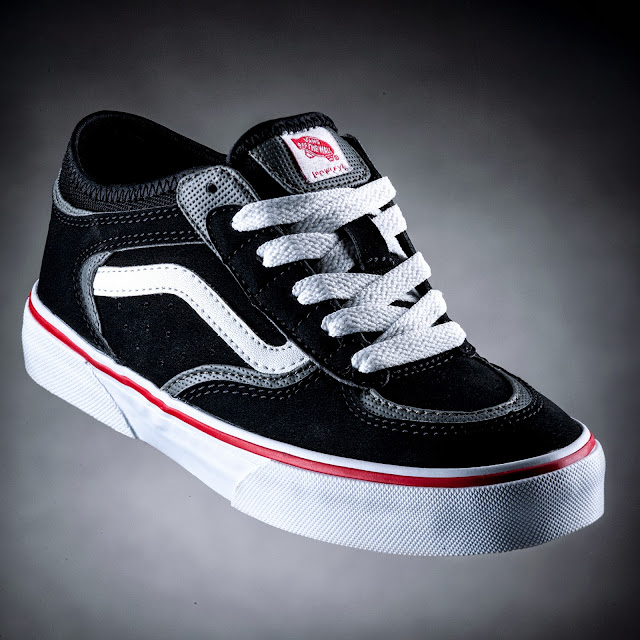 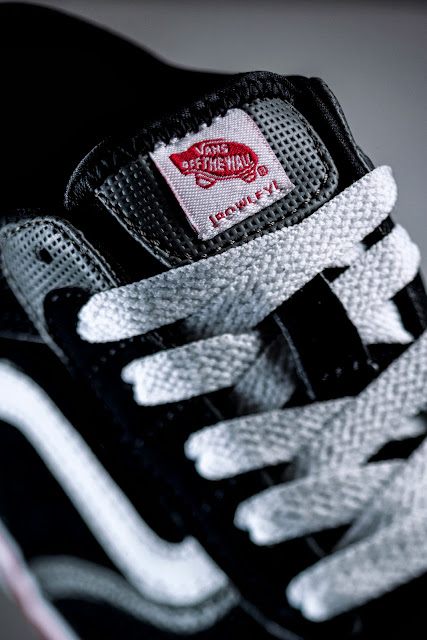 Shallow focus again about f 8, but with camera movements to increase the out of focus areas 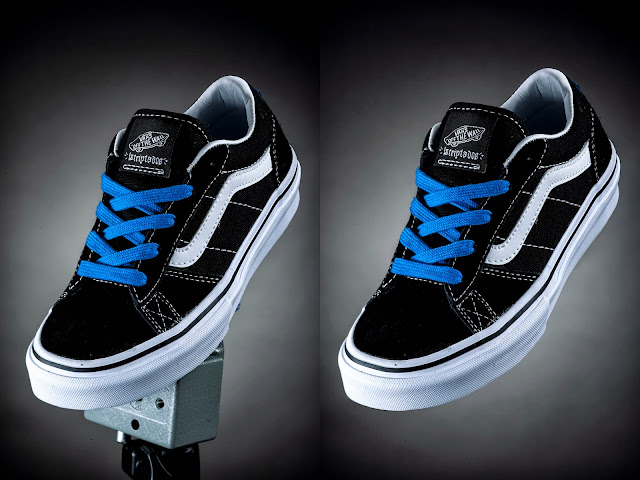 A studio clamp mounted on a lighting stand held the shoes in position, it was removed in photoshop, the last shot I took each time was just of the background with no shoe in the foreground. 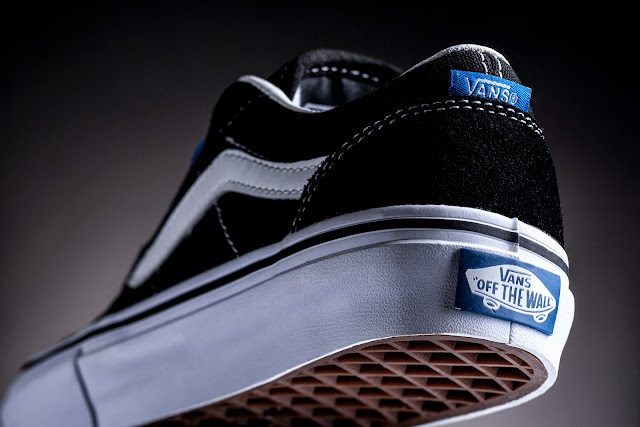 I can see this set up getting a fair bit of use from now on, it feels good to recycle the 5x4 camera, giving it a new lease of life and it gives me another tool at my disposal. 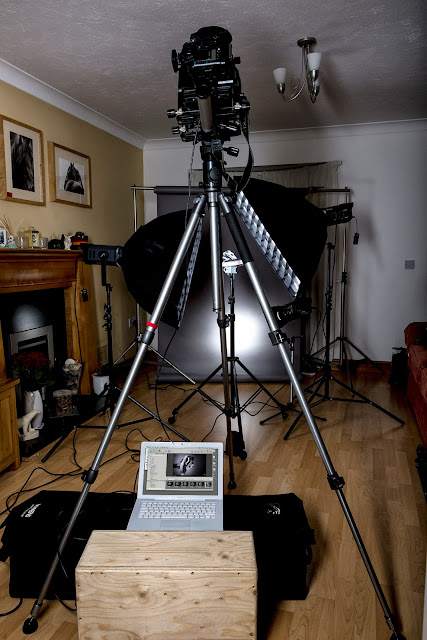 Oh and I shot this in my living room, don't tell anyone will you. 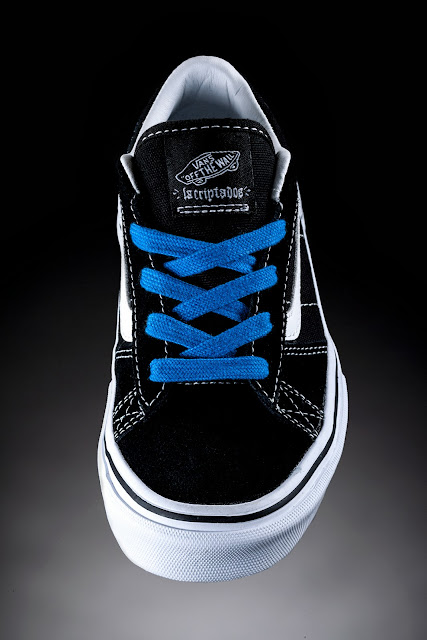