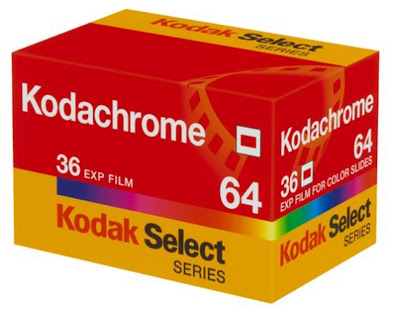 ..... Kodachrome is no more, at least come Thursday it wont be. The last roll gets processed at Dwayne's Photo in Kansas, the last lab in the world still operating a K-14 line, the last roll to be processed was shot by owner Dwayne Steinle. When I closed BZ colour labs (Chester) down the last roll that went through the E-6 process was one of mine, it's kind of personal, like putting a big full stop on the line, it's over and mine was the last roll! Haven't got a clue where that last roll of 120 is, must go and dig it out. Goodbye Kodachrome you've had your day and we'll not see the like again.
at December 31, 2010 No comments:

It's that time of year to sit back and reflect on what the last twelve months have brought. It's been a roller-coaster of a year for me, the first few months were some of the busiest ever, unfortunately they were followed by a few lean months, which make me shudder even now. Through the summer clients started spending more on their advertising and thankfully on new photography to go with it. A couple of big jobs came in and everything started looking a bit rosier, there will still months that were a bit short on work but generally it was on the up.
So what has this shown me, simple more marketing, advertise myself more, GET MY NEW WEBSITE FINISHED, that's got to happen soon and hopefully pick up a few new clients. Also re-new my relationships with a couple of clients I've not heard from for nearly a year, sometimes I forget to send an e-mail asking how things are going or forget to make that catchup call, though I remembered to pop and e-card this Christmas, with some nice responses.
So may you have a happy and prosperous New Year.
at December 31, 2010 No comments: 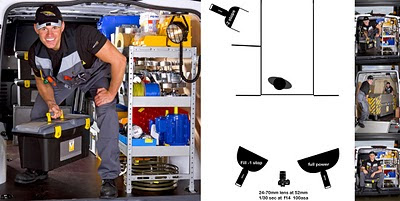 This was shot way back in 2006, the client wanted images to go on the back of their fleet vehicles. Alex the Marketing Manager came up with the idea of looking into the back of the vehicles showing what equipment they carried along with an engineer. The shots were taken in the company vehicle maintenance bays using a Mercedes Vito and Sprinter van, the Vito was first up, with shelving and multicoloured boxes and parts it really lended itself well to being photographed. Rather than lining the camera up centrally we set up slightly to our left looking along the shelving and giving me the opportunity to open the vehicles side door and set up a light to illuminate the interior, something I would have struggled to do with just the two softbox fitted Bowens heads that were aimed at the back of the vehicle. Having set up the lighting (as shown in the diagram above) and filling the shelving with the right equipment e.g. anything that looked good, we got our model to start posing, even during the shoot I had a feeling this was the image the client would choose, it just works.
Next up was the shot in the Sprinter van, this involved a ramp and a very large wheeled equipment trolley, we got Carl one of the van crews to stand at the back of the van as if he was helping push the trolley out, getting light on him was a bit of a problem but I popped a beauty dish with barn doors on and aimed it into the dark recesses of the vehicle. I still needed a little work in Photoshop to even out the fore and background lighting.
It's all change now with the vehicles after four years, the fleet is turning silver and the back doors are now being graced with just the company logo, I'm going to miss seeing these pictures of mine whilst driving up and down the motorway, I seemed to see at least one of the vans out on the road every time I was on the motorway. 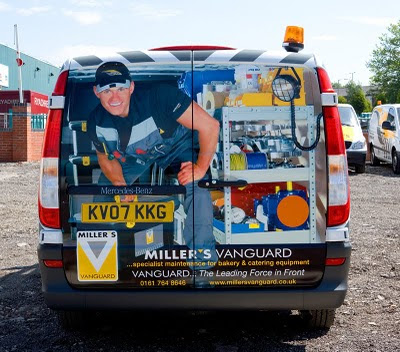 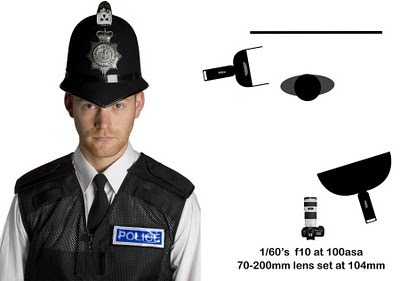 I was shooting a head/helmet camera designed for police use last week, this is one of the shots I took just of the guy, Tim, who had been roped in to do the modelling. The lighting remained the same for the head camera shot, I just got Tim to step forward so that the left side of his face would go darker, the side light to the left was then just lighting the white background, though there is a slight spill of light creeping onto the left side of the helmets band. The main light was to my right, a Bowens 750watt Gemini Pro head with a Redwing 70 x 120 cm softbox, the centre of which was just inline with the police helmet, giving me the shadow I wanted to the left side of the face along the side of the nose and a hint of darkness under the chin.
The shot below illustrates how I used the side light to put a catch light on the small camera on Tim's shoulder, it also puts enough light into the side of his head and clothes to improve the look of the image. 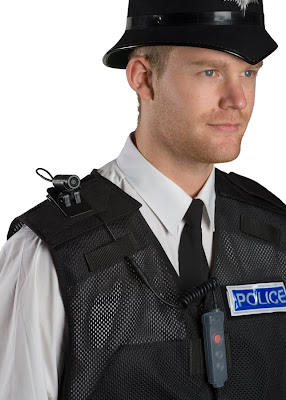 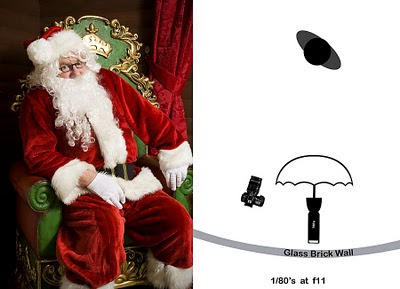 I had a shoot for a client last Friday, they were putting on a Santa's Grotto for a local disabled school. All the kids got teddy bears with their names on them, bit of a logistical nightmare but very touching. There wasn't a great deal of room in the Grotto area for me to set up so I just stuck a 750watt Bowens Gemini Pro head on a stand just to the right of my shooting position. Popped a white shoot through brolly on the flash, now there was a large glass brick wall behind the flash head, this definitely put a bit more reflected light back into the room. I was getting f11 at half power and was good to go, 80 kids later and Santa had probably lost a few pounds in weight, but to see the smiles on the kids faces it was so worth it.
at December 15, 2010 No comments: