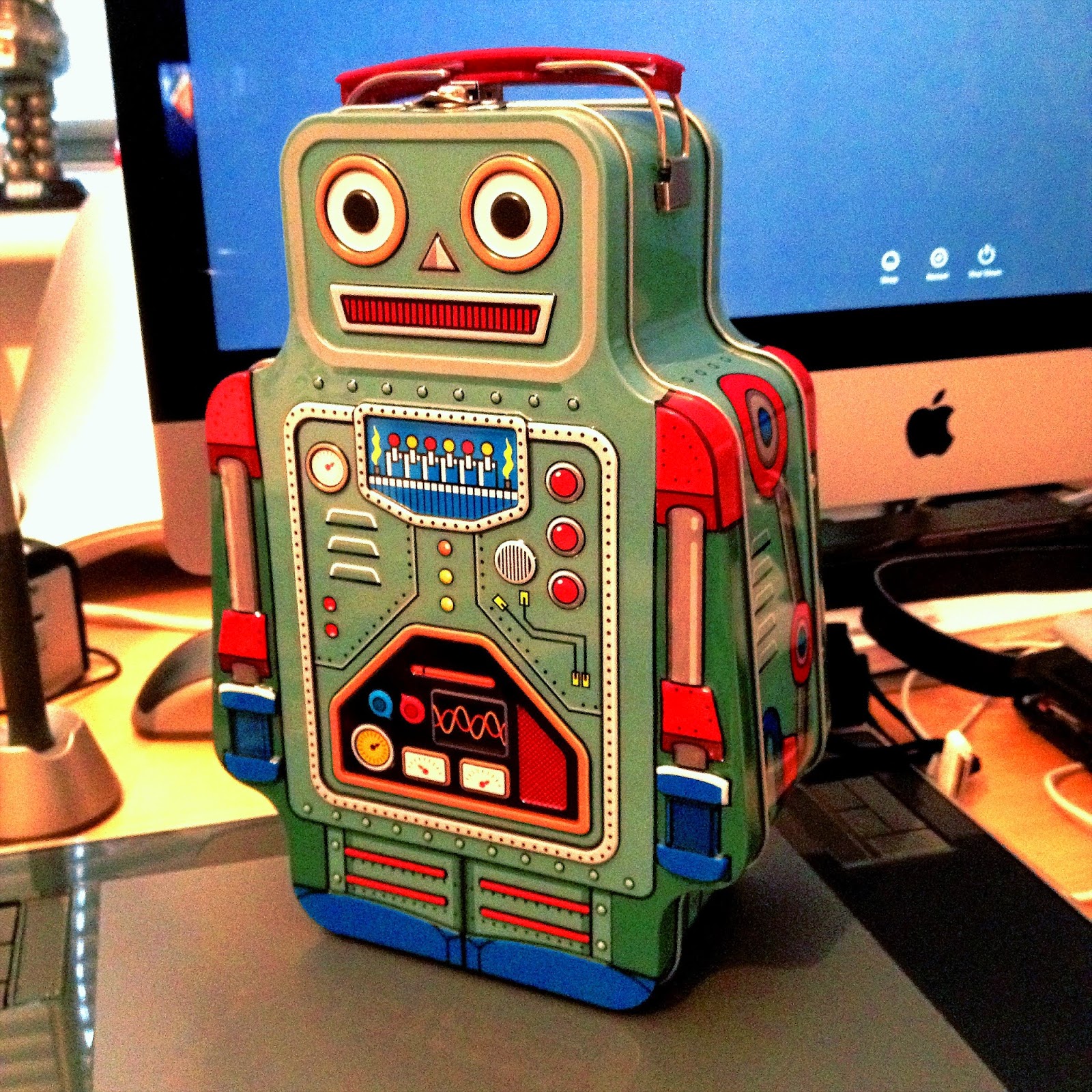 I have a raft of ideas for portfolio shots, I've been trying to get my act together this week, between other jobs, to get started on a few of them. I've been spraying beer bottles with clear coat for some wet look bottle shots, I still need to do a few more coats. I've tiled a board with mosaic tiles for another shot idea, though I still need to grout them, the shot involves a robot lunch box, nuts, bolts, screws, wire wool, and some glass jars that I have designed labels for, oh and a can of oil. I have a box full of plastic toy soldiers that will be used on another shot that I want to use for promoting the business. The problem is there is always something getting in the way of finishing these projects, work. I'm not complaining, obviously, but my conscience is bugging me to get the portfolio shots finished... I'm hoping for a bit of time tomorrow to get the beer shots done, so I had better go give them another thin coat of clear coat... A photographers work is never done.

The label have been finished today (05-12-2014), just need to finish the design for the oil can. Bolts have finally turned up, shoot now set for next week. 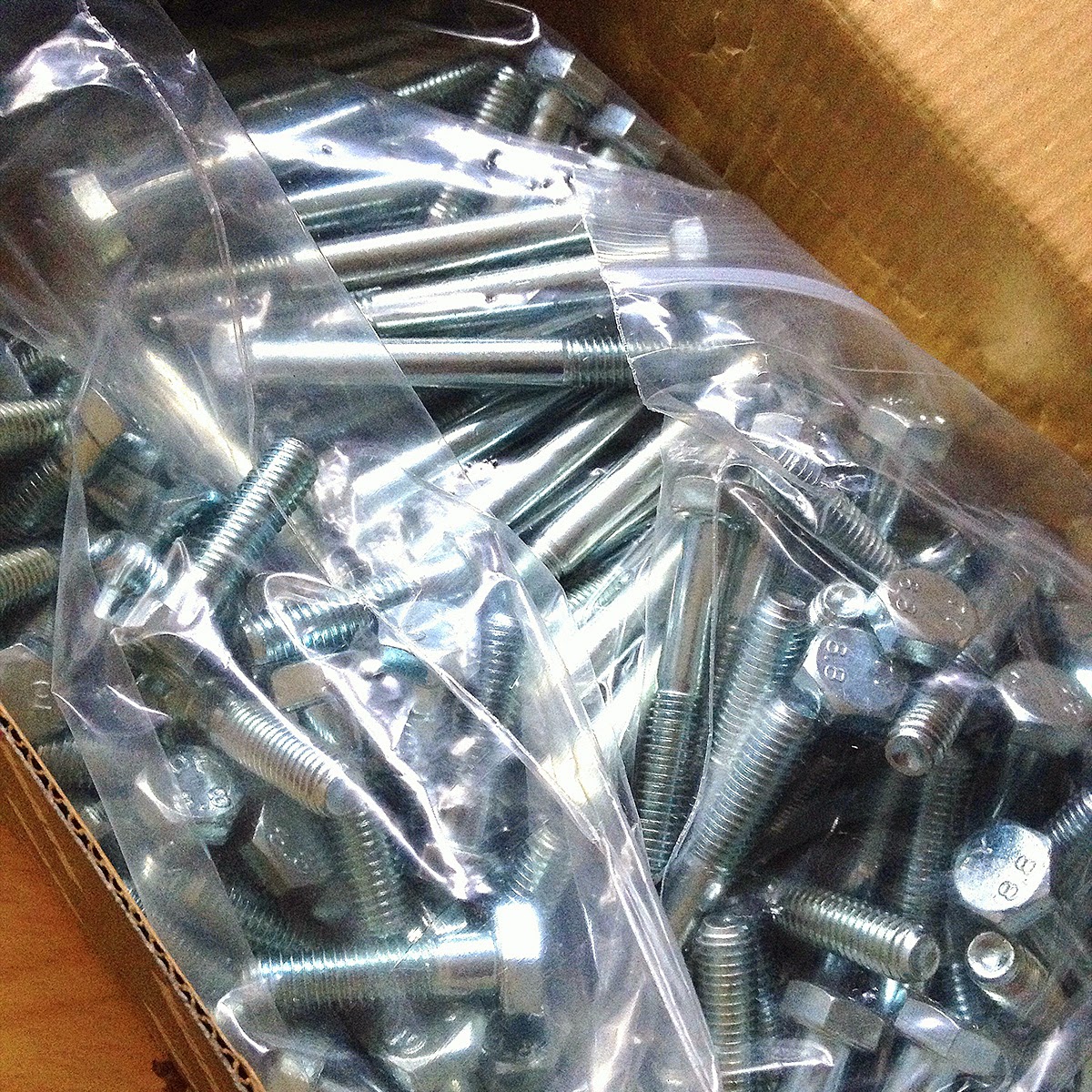 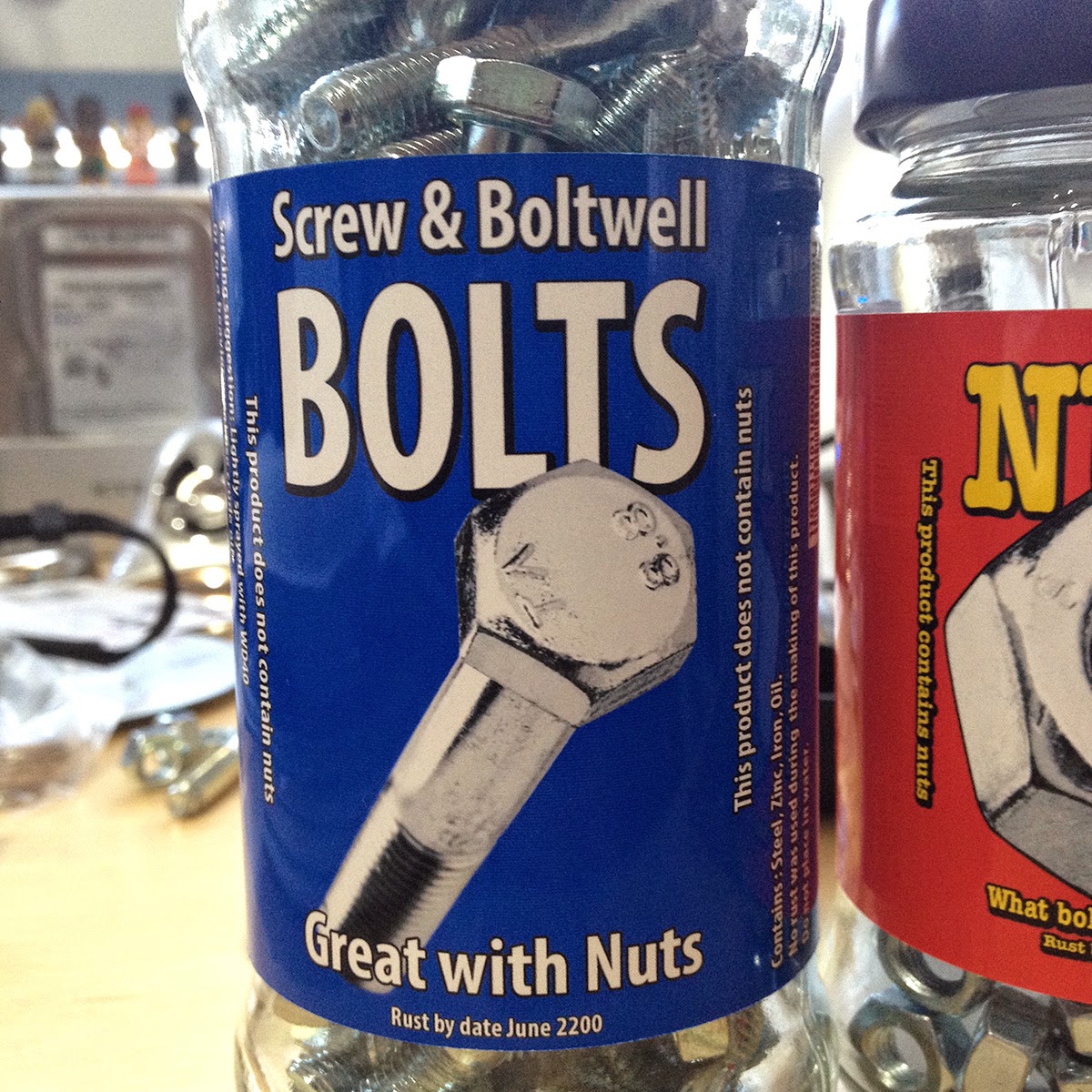 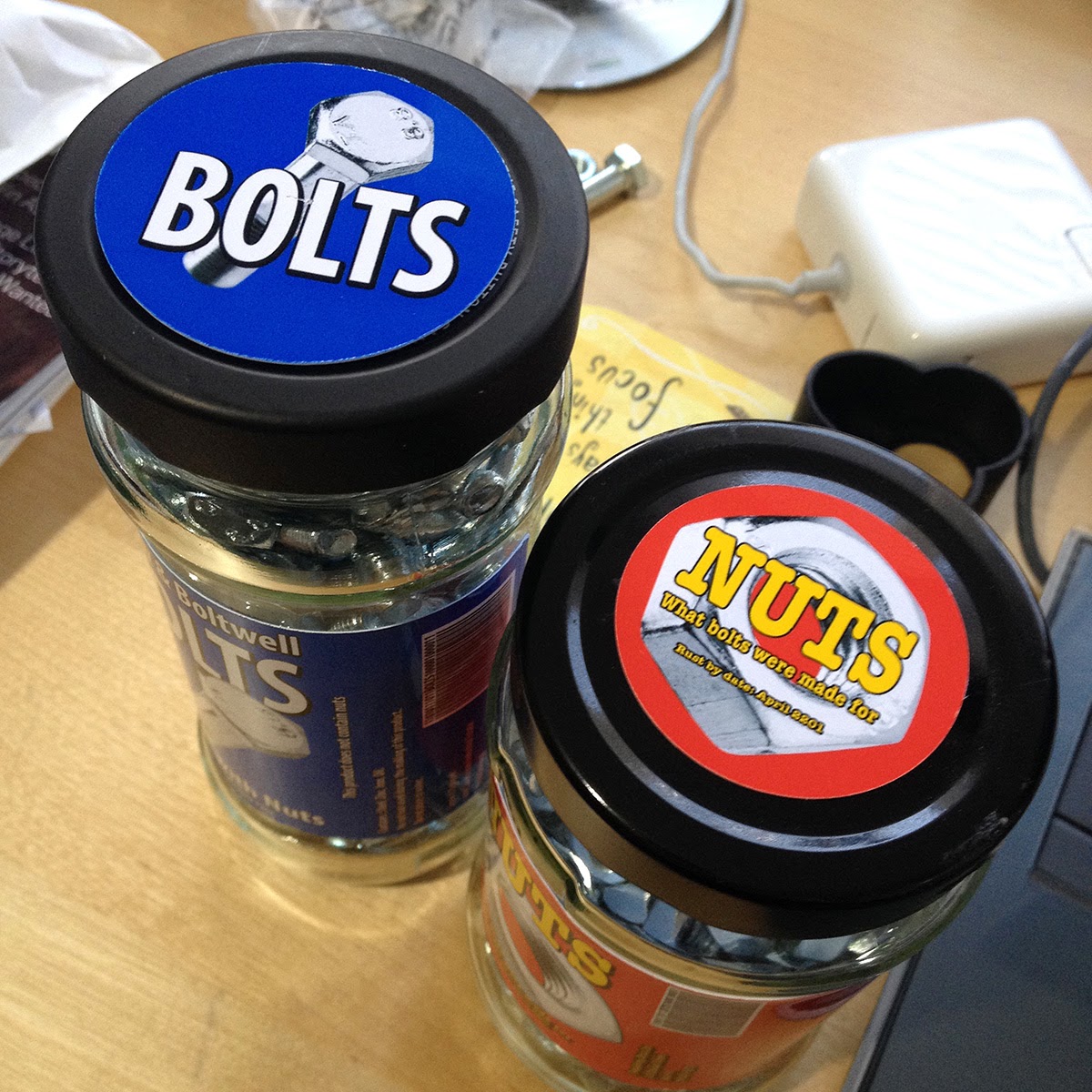 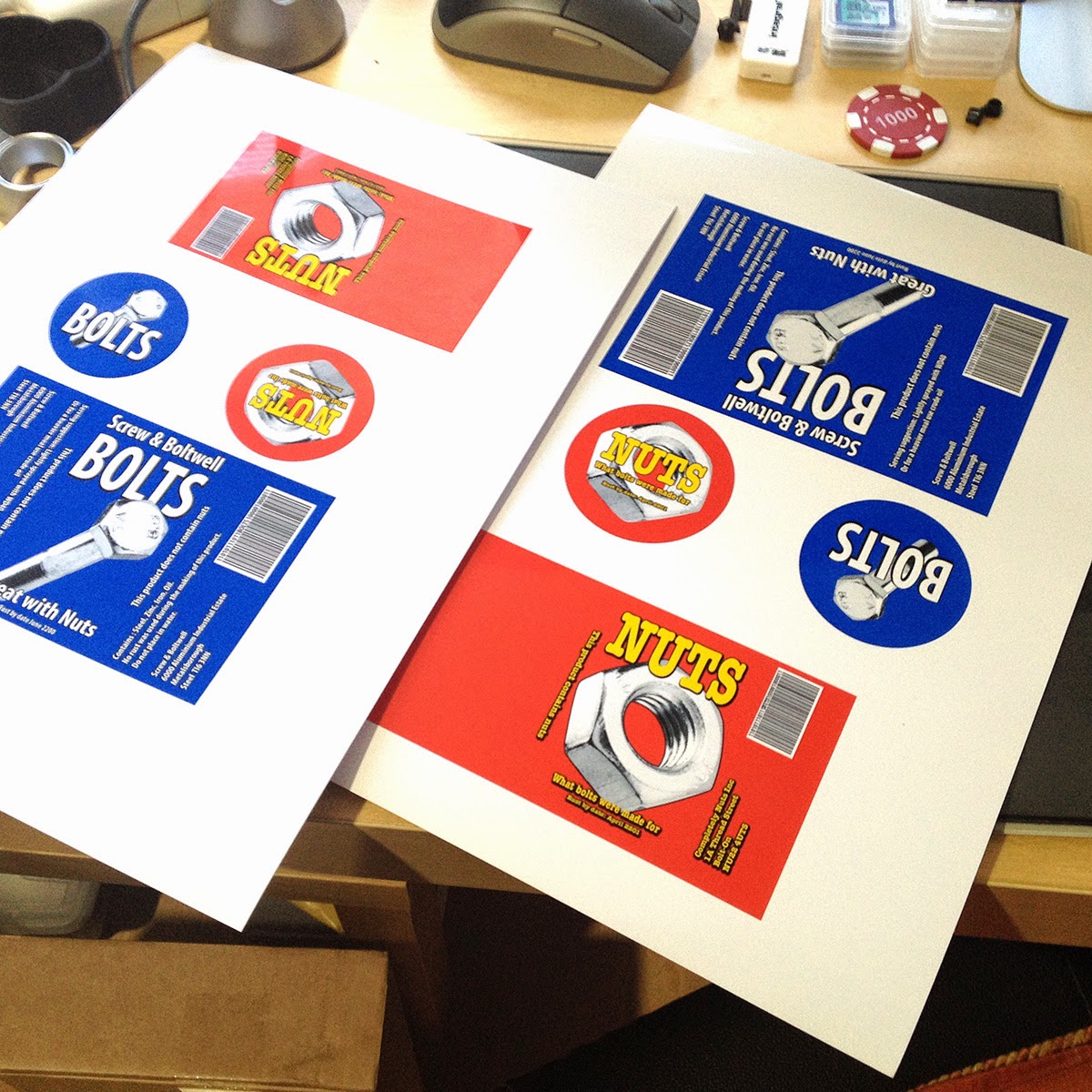 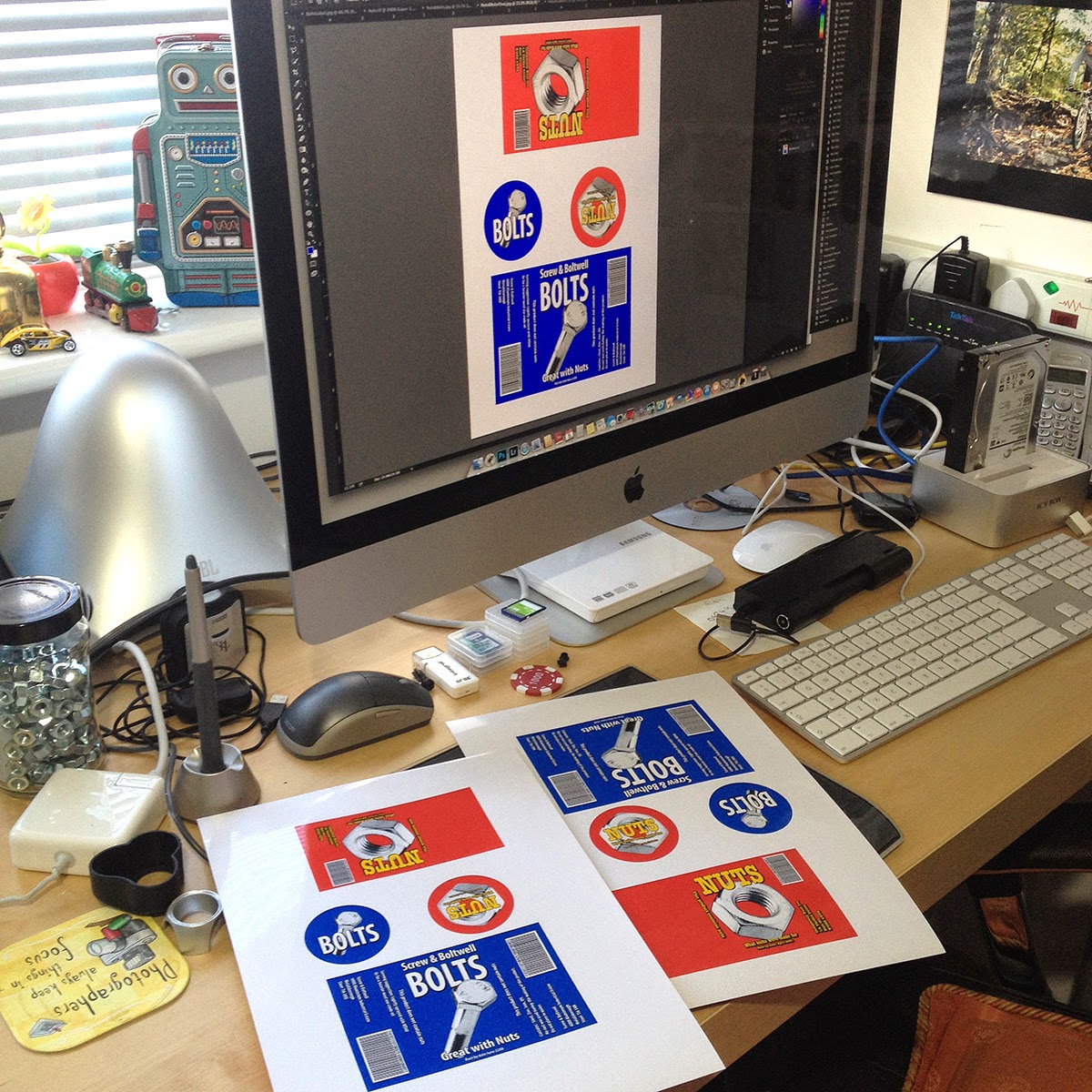 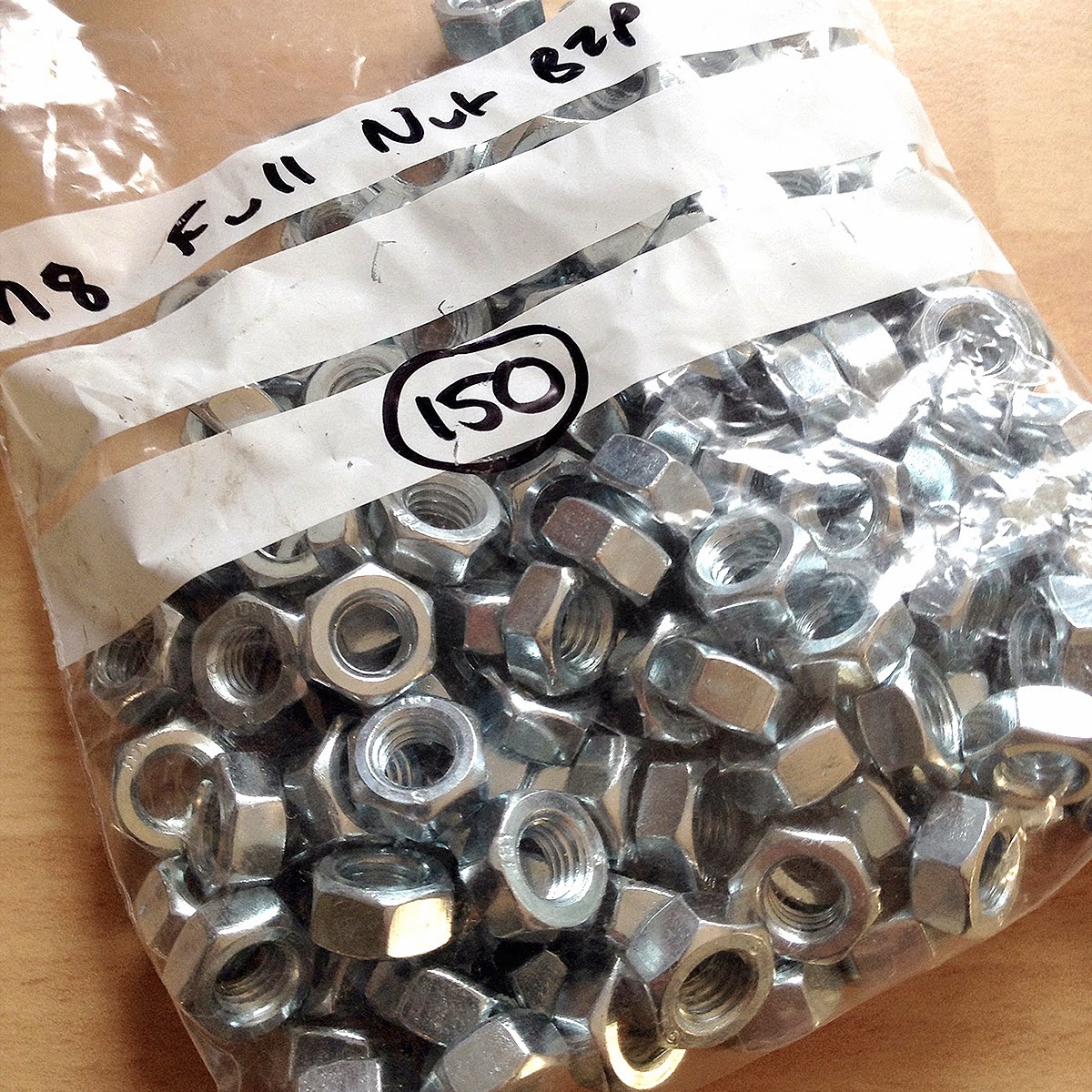 Today I was wrapping up the final three shots of a job shooting LED external lighting, having done all the studio packaging shots over the wet weekend it was a relief that Monday dawned dry so I could get the external shots done, a shot of three different lights being used as up lighters.

I'd set up at a neighbours house, who had generously let me use their front garden, and I'd shot a few test shots when I was interrupted by my son's headmaster, who was on her way from the primary school to the local secondary school. After a short chat I was again left to play with getting my lighting spot on. A few tweaks here and there and I was sorted. The three lighting units were quickly shot. 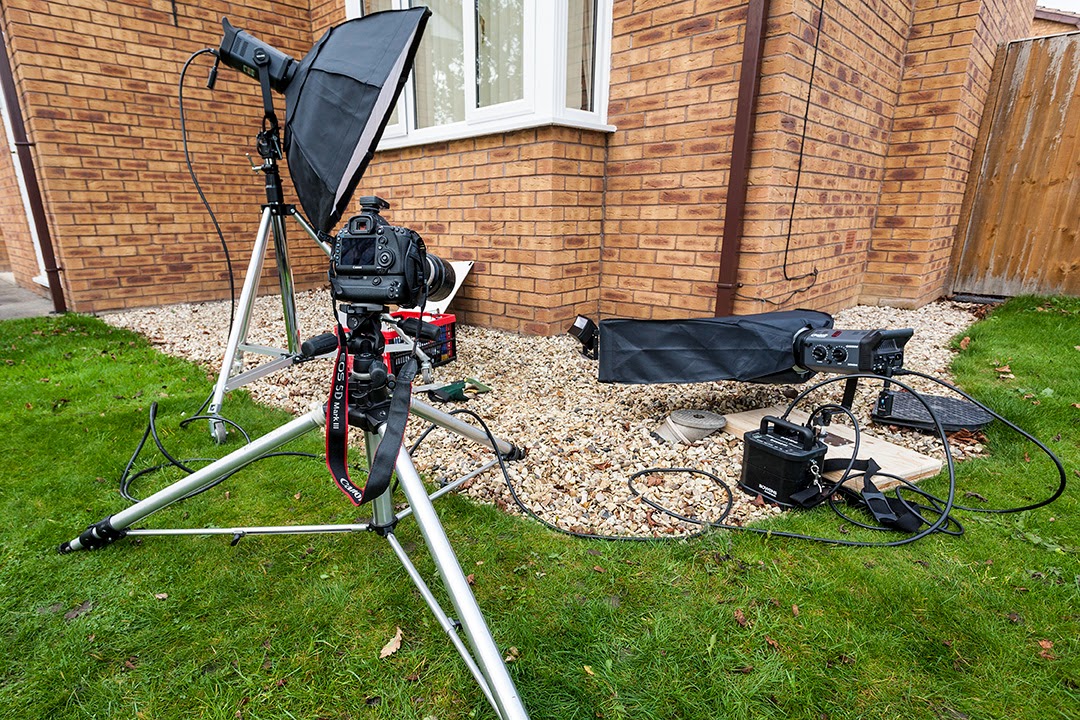 The set up, two Bowens Gemini GM500 heads, one with a 15cm x 90cm stripbox with grid, the other with a 90cm Octabox, both plugged into a single Bowens TravelPak using a standard 3 metre cable and an 8 metre TravelPak cable. 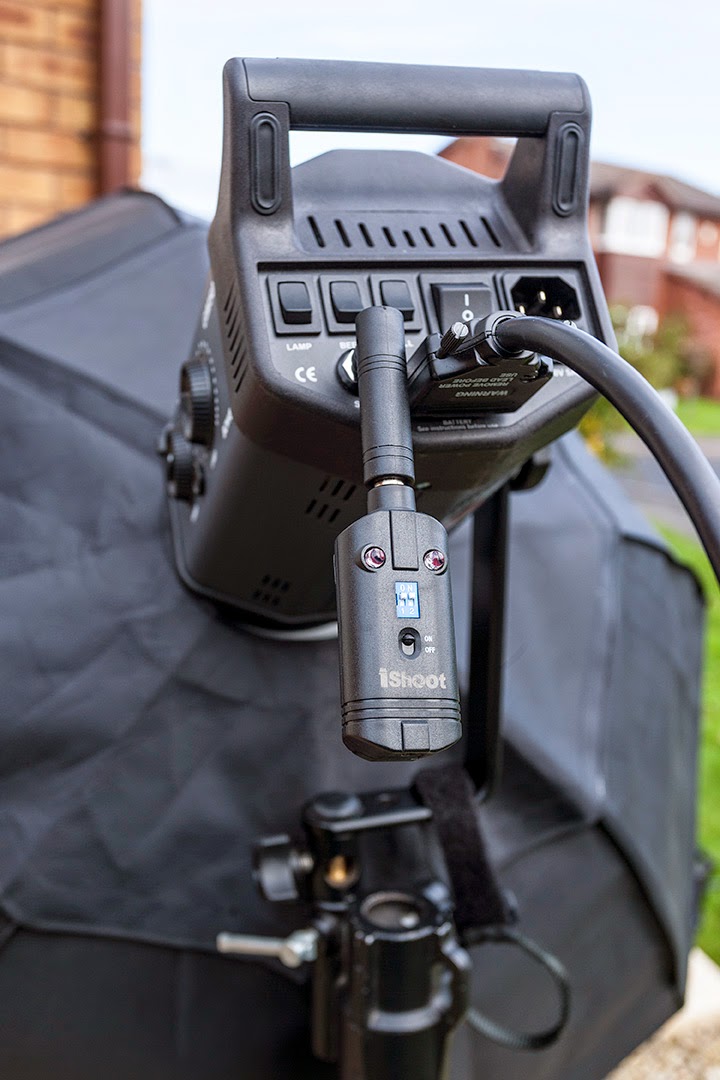 The iShoot transmitter and receivers did the syncing duty, love these units, so cheap, but they've not let me down once. 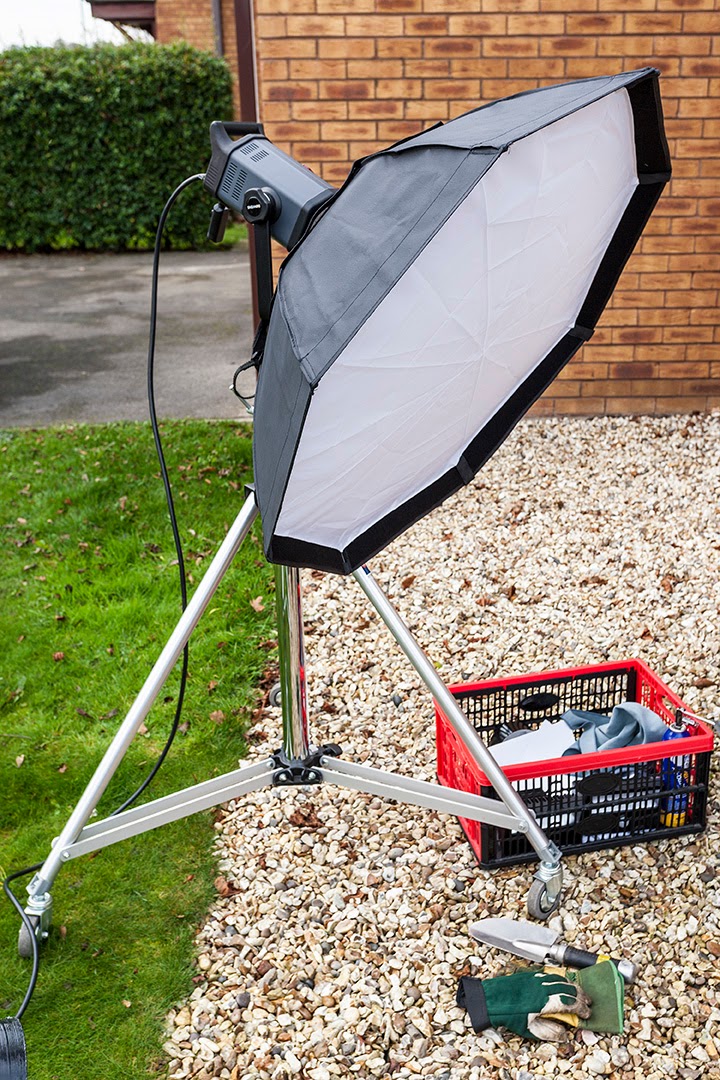 The Octabox is becoming my favourite go to softbox, either this 90cm or my 120cm, love the light from these things. Here the main light is sat atop a Manfrotto follow spot stand, such a great piece of kit, it'll handle loads of 40kg, so solid as a rock, though on a windy day I'd still weigh it down with sandbags. No wind today, thankfully. 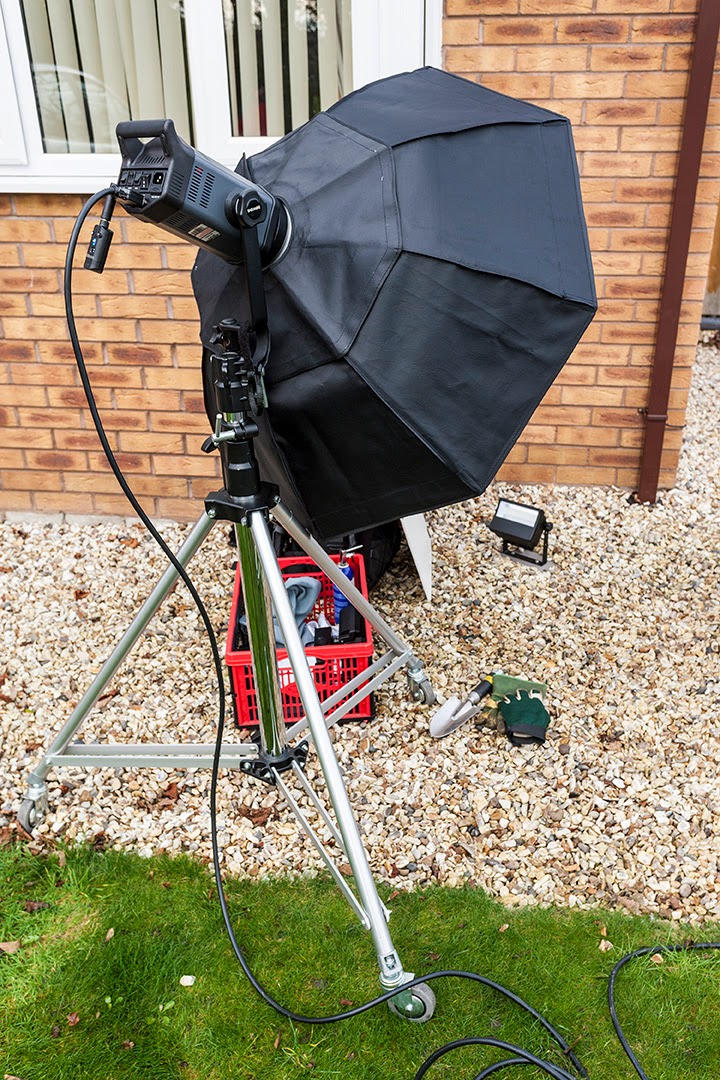 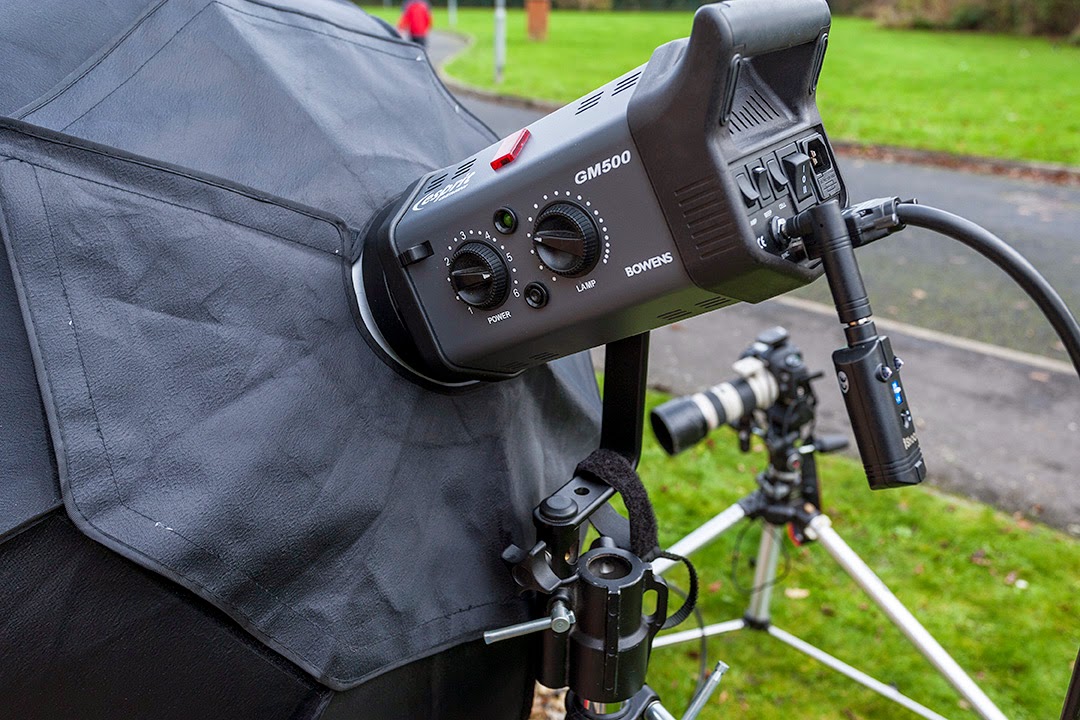 The iShoot receivers have only one drawback, when you're using the Bowens TravelPak cables the receivers foul on the cable plug, a simple right angle Jack-plug adaptor sorts the problem. 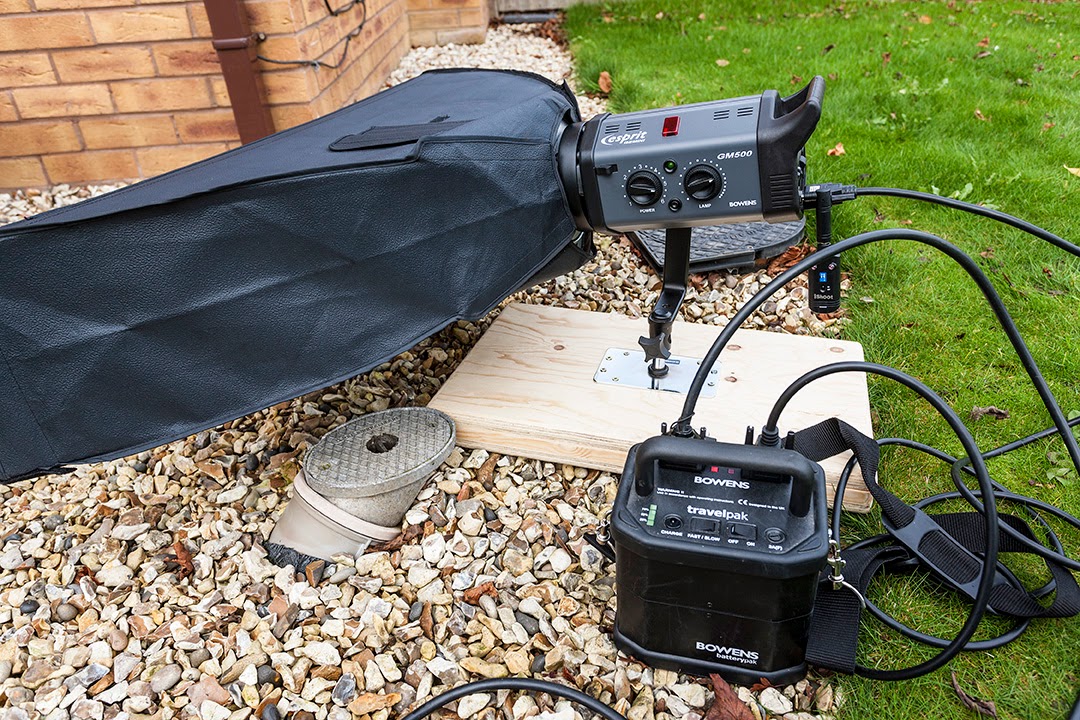 A Bowens Esprit Gemini GM500 flash-head, mounted on a quarter Apple Box with a Manfrotto F800 Baby Plate, the strip box with grid, nice and low to put a little edge to the lighting from camera right. 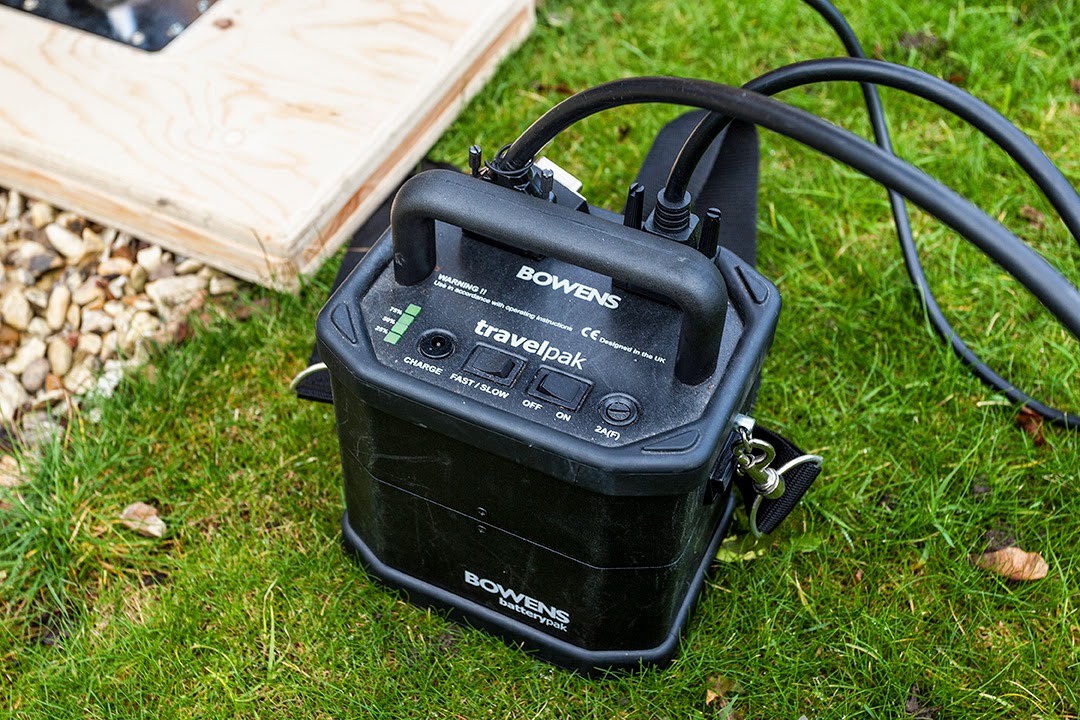 The Bowens TravelPak, I've got a couple of these, they are something, I have to say, I could never do without, excellent bit of kit. 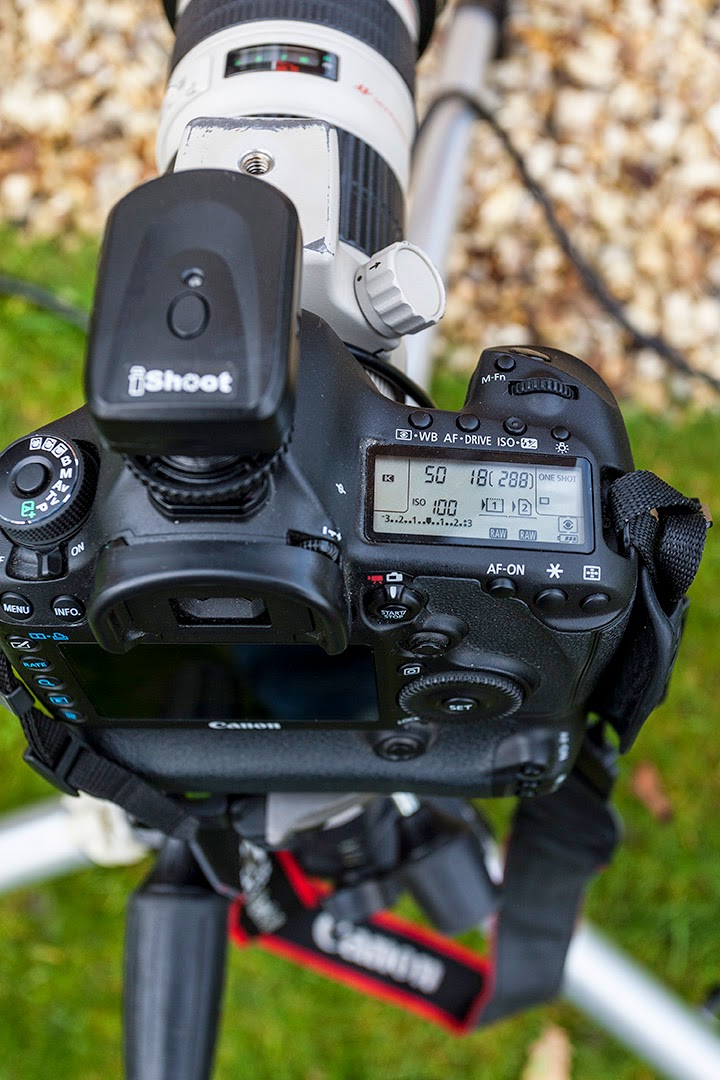 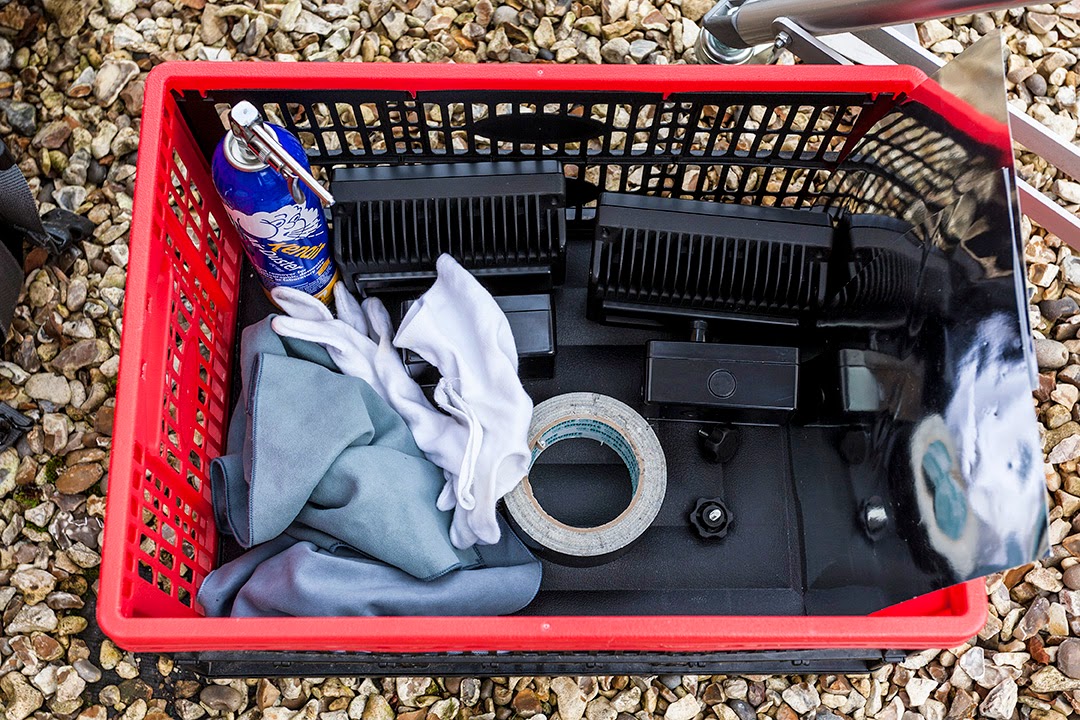 Box of products, canned air, white cotton gloves, silver fill cards, lint free cloths, and of course gaffer tape. You can never go anywhere without gaffer tape, though I didn't use any today. 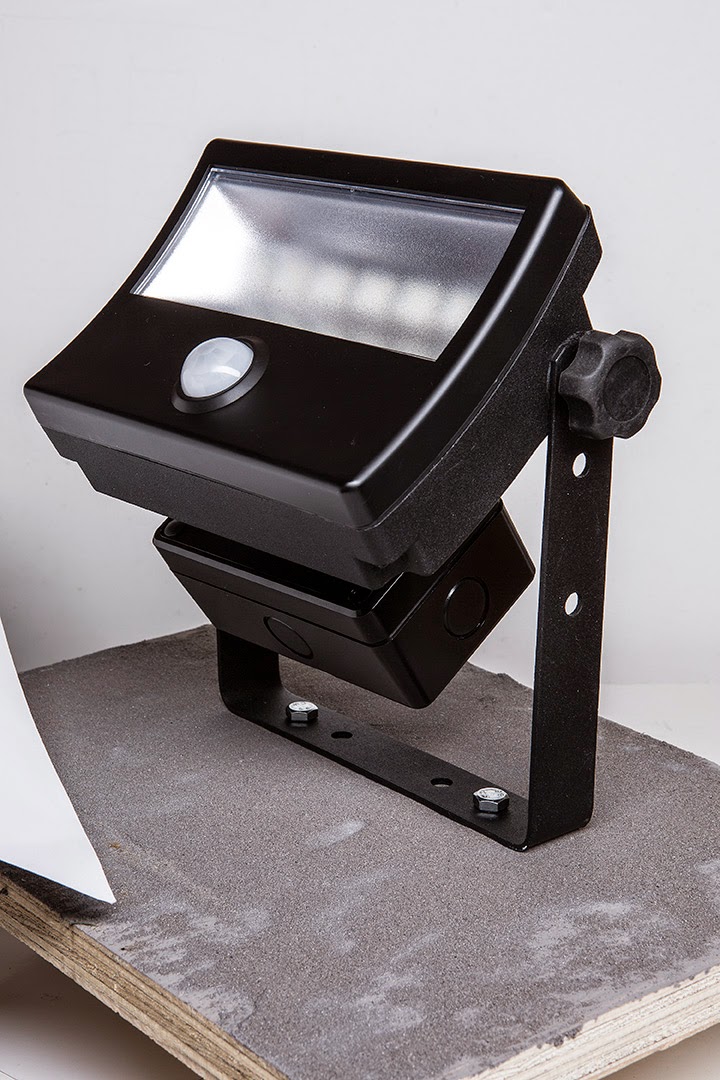 The day before I painted an 18mm block of plywood with grey floor paint with silica sand mixed into it, to try and get a concrete kind of feel for the base that the LED uplighter would be mounted on in the ground, geez that floor paint is heady stuff, open a window, don't sit and breathe that stuff in, like I did. 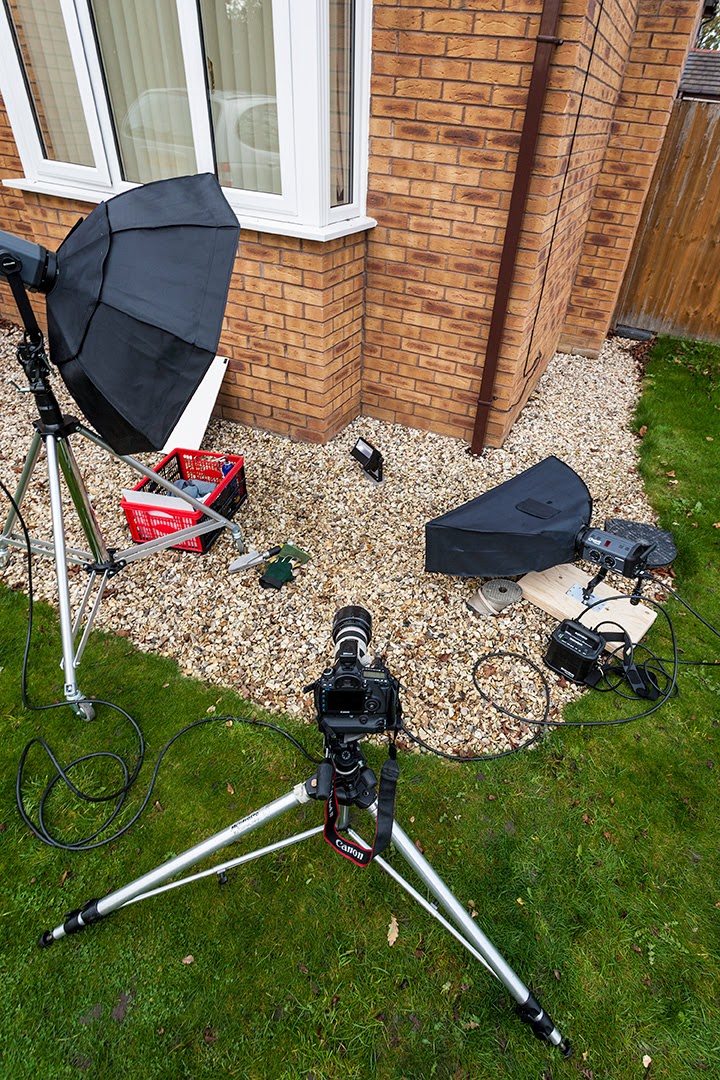 As near a look down shot as I could get without a ladder, or quadcopter. The initial test shots were taken on the 70-200, but I got lower and a lot closer for the wide angle effect of the final image. 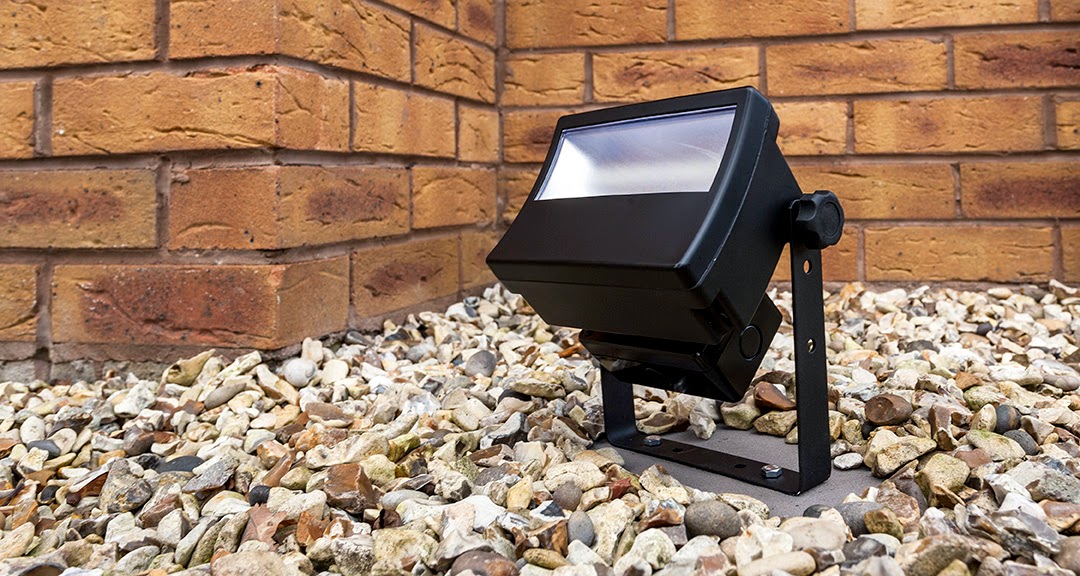 Above no flash, just available daylight. 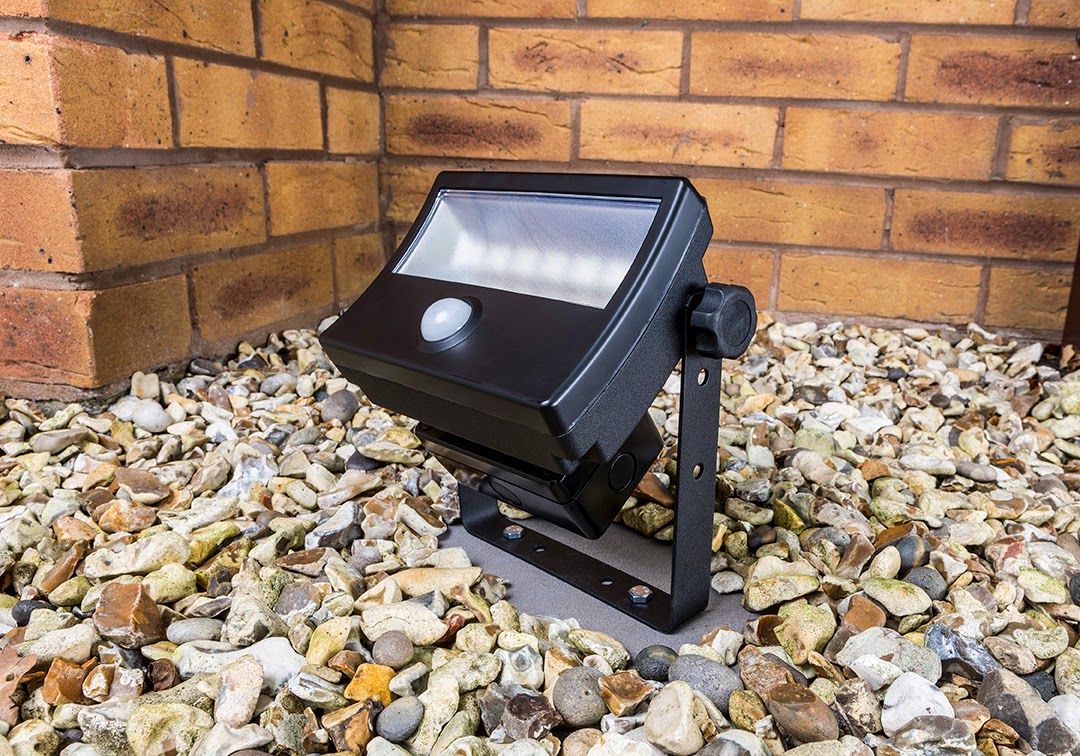 Above, both flashes, and fill card camera left.

All images ©2014 Alistair Kerr Photography
A simple bit of copy and pasting will just lead to a nasty letter from my copyright lawyer..
Oh and don't doubt I'd do it, I've already had to take action against a company last week who thought it was okay to steal images.
at November 10, 2014 No comments: