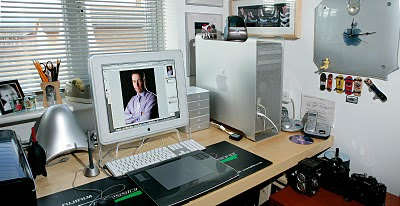 My office has always been dominated by a big old Apple 21 inch Studio screen, sometimes two 21 inch studio screens, but not anymore, they've been consigned to the garage (doesn't my back know it). This has left space for my Mac Pro to move up off the floor and onto the desk, which is useful as I don't have to rummage around under the desk every time I want to put a disk in the machine. As you can see next to the Mac are a stack of iomega minimax external hard drives, there are three 1TB and two 2TB drives, these mirror the drives in the Mac, though now the 2TB drives are being used as a mirrored pair for back up as the Mac drives are pretty much full (though new internal drives are next on the order list). I like the iomega drives, as well as having multiple ports on the back for chaining them together they've always worked very well and look great next to the Mac. The new 2TB drives only come with Firewire 800 and USB2 ports, I use the Firewire as I've never been enamored with USB, finding it to slow. 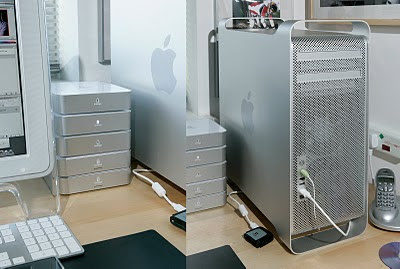 The MacPro, as well as having all four drive bays full, has 8GB of memory to help keep the programs zipping along nicely. That's it as far as up-grades to how the machine came as standard. The Apple screen is an old 17 inch LCD display, not exactly cutting edge I know but such an improvement on the flickering CRT, I'm looking at up-grading to a bigger screen but will be waiting till the start of the next financial year before parting with any money. 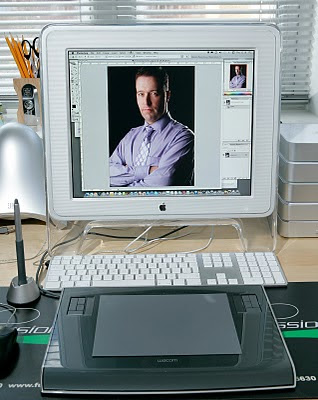 My trusty Wacom pad, I really can't understand anyone who still uses a mouse for re-touching in Photoshop, it's become a real asset to my workflow I'd be lost without it. The new Magic Trackpad from Apple looks and feels great, I've played with them in store but haven't yet shelled out for one, maybe soon. The Mac clock on the wall of the office I made from parts of an old G4, the clock mechanism was bought on e-bay, different and fun.
at November 25, 2010 No comments: 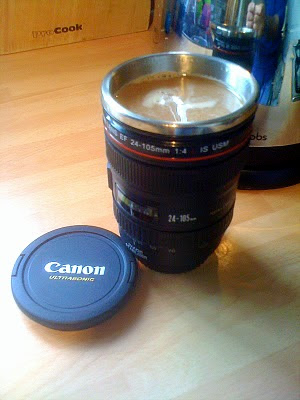 Drinking coffee from a 24-105mm f4 L IS USM lens is such a laugh. When my wife saw me she got quiet a shock. This quickly turned to 'So where did you get that from?' the answer Hong Kong, the link is at the bottom of the post, they also sell the 70-200mm Canon lens/coffee cup that Canon gave out to snappers at the Winter Olympics in Vancouver. It's on my wish list, roll on Christmas. You'll have to excuse the image quality, iPhone 3G camera is nothing if not a little rubbish...... 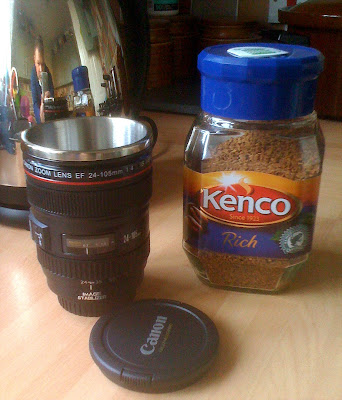 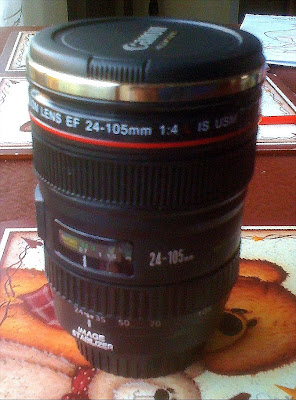